UEFA in the dark over possible World Cup formats 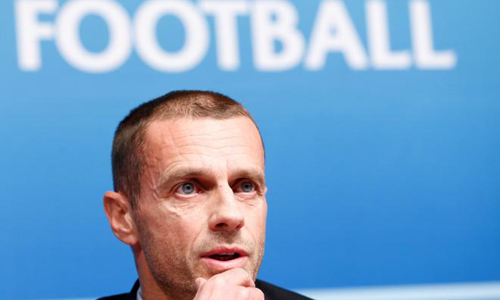 UEFA in the dark over possible World Cup formats

NYON - European football's governing body has been left in the dark over the future format of the World Cup and was not certain it would vote for an expanded tournament, its president said on Friday.
Aleksander Ceferin said UEFA had been getting information from the media because the game's world ruling body FIFA had not replied to their request for more details of the proposals. The FIFA Council, whose 37 members include seven from UEFA, is due to vote in January on the format of the tournament from 2026 onwards.
FIFA chief Gianni Infantino was elected in February after promising in his campaign to increase the number of teams at the World Cup from 32 to 40 starting with the 2026 finals.
He then said he wanted a 48-team tournament including a preliminary knockout round followed by four groups of eight. This week he changed his mind again, proposing 48 teams divided into 16 groups of three. Asked if UEFA would back an expanded tournament, Ceferin said: "I am not sure we are getting that way. "We don't have much information from FIFA, we mainly read from newspapers about what is supposed to go on...(and) we get different formats every day. "Until we get some concrete information about the format, about everything else, we simply don't have any information." Ceferin said he hoped UEFA would get more details when the secretary generals of the continental confederations meet in Tokyo in December. "We asked in October for an appropriate analysis to show what it means to extend the World Cup and FIFA didn't produce it... so without proper information, we can't say that we will be interested in that kind of World Cup." BEST PRODUCT UEFA confirmed that controversial changes to the Champions League announced in August would come into effect from the 2018-19 campaign and Ceferin dismissed suggestions that the showpiece competition had become too predictable. UEFA rearranged the group-stage slots in favour of its four top-ranked leagues - in effect Spain, England, Germany and Italy - by guaranteeing them four places each and reduced the slots available for the champions of smaller leagues. "The Champions League is the best sports product in the world, I'm sure," he said. UEFA also said all knockout stage matches would kick off at 2000 GMT. Ceferin promised a transparent bidding process for choosing the hosts of the Champions League and Europa League finals, decisions which until now had been chosen behind closed doors by UEFA's executive committee. "There will be no more political favours concerning (the) decision of who will host the finals of Champions League and Europa League, there will be a clear bidding procedure from now on," he said. He added that joint bids would be allowed for Euro 2024 although if three or more countries made a joint bid, only two would qualify automatically. Potential host nations for the tournament have until March 3 to confirm their interest with the winners to be announced in September 2018. Lyon was named as the host city for this season's Europa League final. -Reuters