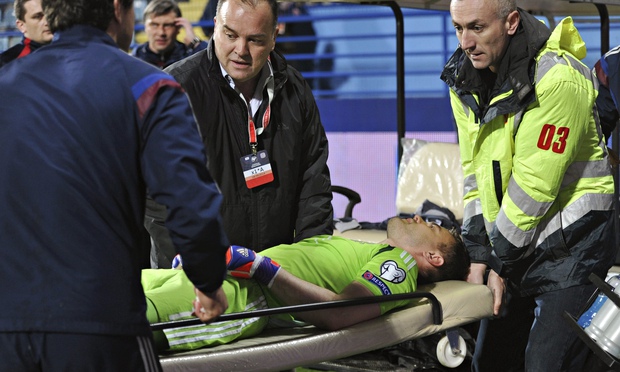 PODGORICA - UEFA has opened disciplinary proceedings against Montenegro and Russia after Saturday's Euro 2016 qualifier in Podgorica was abandoned in the second half following crowd trouble and a scuffle among the players. European football's governing body said on Monday it was probing the "setting off and throwing of fireworks and objects" by Montenegro and Russia fans during the Group G match. Montenegro's FA (FSCG) is also being investigated for "holding a match that did not get played in full", UEFA said in a statement. The match was goalless when it was abandoned. The game was first delayed by 33 minutes when Russia goalkeeper Igor Akinfeev was hit on the head by a flare thrown from the Montenegro section of the ground soon after kickoff. He had to come off and was taken to hospital with burns. Midway through the second half a scuffle ensued between players near the touchline andRussia midfielder Dmitri Kombarov was hit by a missile prompting the referee to abandon the game. The Football Union of Russia (RFS) has lodged a protest with UEFA and wants to be awarded the points. Third-placed Russia and Montenegro in fourth are level on five points from four matches. - Reuters