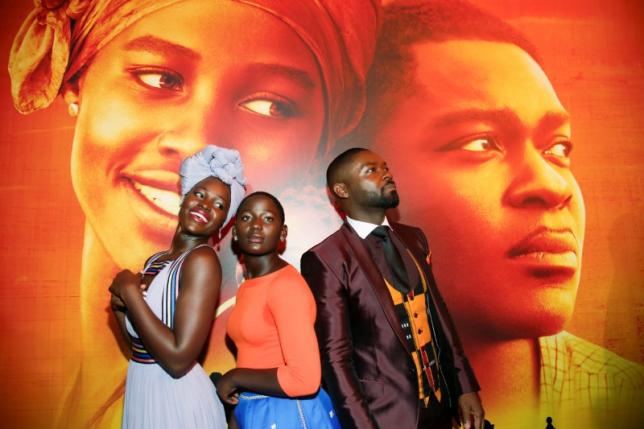 LOS ANGELES - Disney's "Queen of Katwe" isn't just the true story of Ugandan chess champion Phiona Mutesi overcoming overwhelming odds stacked against her; it's also a rare uplifting tale from the African continent. "God knows there's an immense paucity of films about anything to do with Africa that is about a specific place or specific street or country or character. It's always a kind of colonial nostalgia that we're presented," director Mira Nair said. "The story of Phiona specifically was the inspiration. I'm always inspired by people who make something out of nothing," she added. The slums of Katwe become a character within "Queen of Katwe," out in U.S. movie theaters on Friday, providing the backdrop for Mutesi's humble small world as the child is taught chess by charity worker Robert Katende, who is played by David Oyelowo. She eventually rises the ranks of the chess world to play on the Ugandan team as a teenager in the 2010 Chess Olympiad in Russia. "Though they live in a world of struggle, that is not what defines who they are," Oscar-winner Lupita Nyong'o, who plays Mutesi's mother Harriet, said of the Katwe community. "You see a lot of personality, color and style. Uganda has a style that would make you gasp, I tell you," she added. In the film, Mutesi often doubts her abilities, but it is the calm, upbeat and optimistic 'Coach' Katende who keeps guiding her to believe in herself. Both the real life Mutesi and Katende joined the cast to discuss the film at its Toronto film festival premiere earlier in September. It is based on a book by sportswriter Tim Crothers. Mutesi said she still cannot believe that her life is on the big screen, but her ambitions will not stop with Hollywood. "I want to become a lawyer in my academics and I also want to become a Grandmaster in chess. I'm still playing chess, and I also want to become a teacher in chess," she said. As for the people of Katwe, many of whom were involved in the shoot as extras or assistants to the production team, the film presents new opportunities, Katende said. "The whole community became so vibrant, and then also looking at the whole story, it's more like creating hope because people in there, they live in a vicious cycle, so right now they say 'no, I think we can break this cycle,'" he said. -Reuters