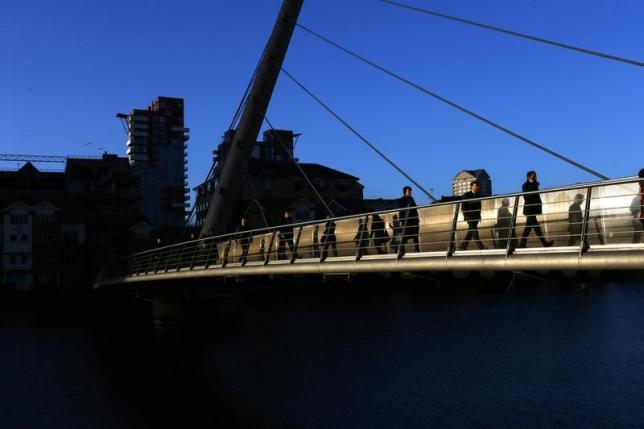 LONDON - Starting salaries advertised in Britain fell in August for the second straight month compared with a year ago, a survey found on Tuesday, adding to recent mixed signals from in the labour market. A survey by online jobs search engine Adzuna found that the average advertised starting salary in August fell to 33,318 pounds ($50,653), compared to 33,505 pounds in July and down 3.3 percent since August 2014. While some other private sector surveys have pointed to cooling wage growth, the figures look at odds with official data released last week that showed British wages grew at their fastest rate in more than six years in the three months to July. The Bank of England considers healthy wage increases key to timing its decision to hike interest rates. Its deputy governor Ben Broadbent said last week low-skilled migrants and less business investment may have hurt Britain's wage growth in the past couple of years. Adzuna said wages were hurt by the large number of new graduates looking for entry-level jobs and a boom in lower-paid roles. "The jobs market is starting to slow down, with an influx of entry-level and low-paid vacancies reducing advertised salaries," Adzuna co-founder Andrew Hunter said. The survey also found that salaries in the energy, oil and gas sector fell 11.9 percent to 40,717 pounds compared with a year ago, more than any other sector. A year-long decline in oil prices has put pressure on oil companies operating in the North Sea, with official figures saying 5,500 jobs have been cut in the region since late 2014. -Reuters