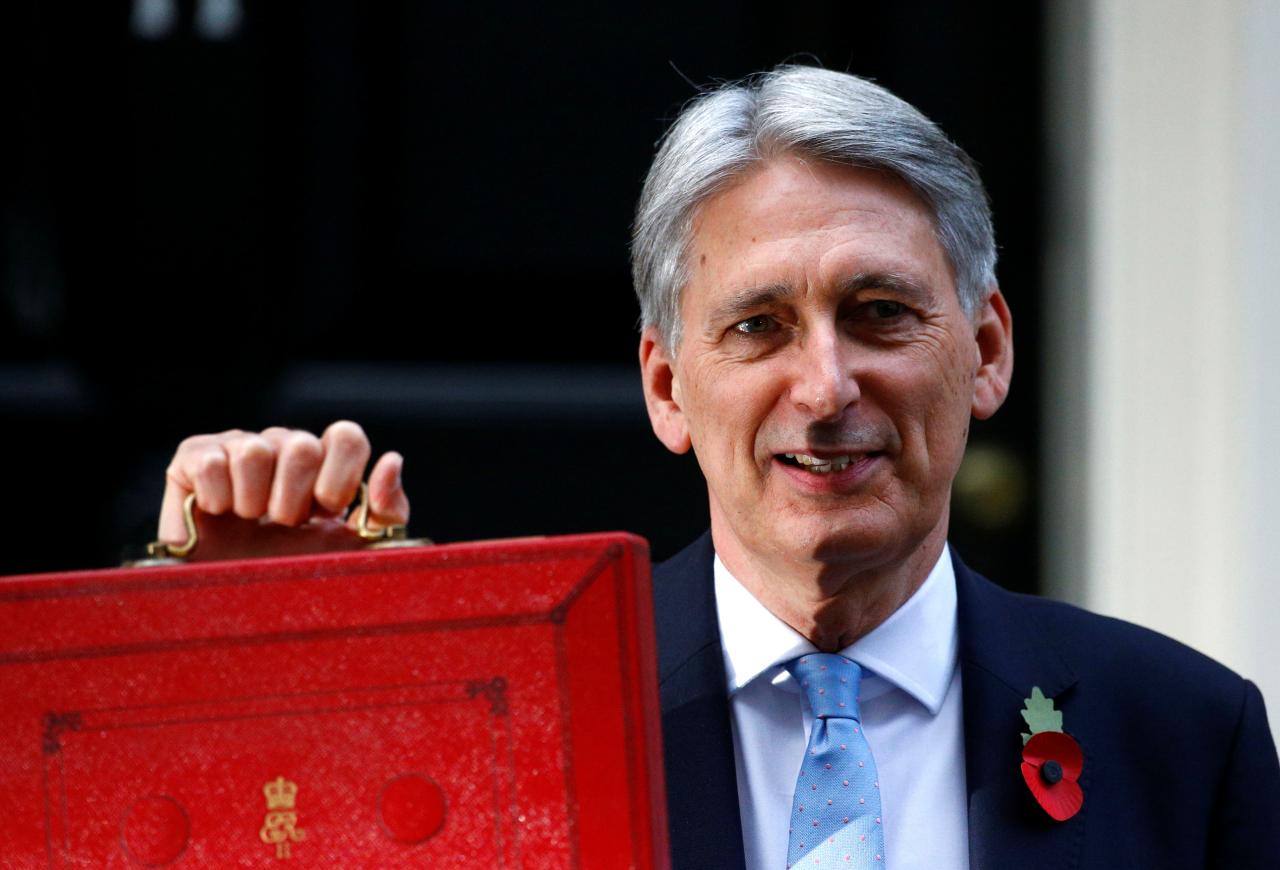 LONDON (Reuters) - Chancellor of the Exchequer Philip Hammond held out the prospect of an end to Britain’s long spending squeeze provided the government secures a Brexit deal with the EU, putting pressure on the divided Conservative Party to back Prime Minister Theresa May. Delivering an annual budget speech that sought to change the tone about tax and spending a decade after the financial crisis, Hammond announced tax cuts for households and the easing of welfare curbs for poorer working families. He also took aim at big tech firms such as Google , Facebook  and Amazon  with a new sales levy. In his last tax and spending plan before Britain leaves the European Union in five months’ time, Hammond tried to help May overcome resistance in her party about how close Britain should stay after Brexit to the bloc that buys nearly half its exports. “When our EU negotiations deliver a deal, as I am confident they will, I expect that the ‘Deal Dividend’ will allow us to provide further funding,” Hammond told parliament. “The hard work of the British people is paying off. Austerity is coming to an end.” Britain’s economy has slowed since the 2016 Brexit vote, but not as much as many economists had feared. Despite surprisingly strong tax receipts, as well as a modest upgrade to the economy’s growth rate, Hammond announced only a relatively small fall in Britain’s borrowing needs between now and the mid-2020s. “The budget spends the fiscal windfall rather than saving it,” the Office for Budget Responsibility, whose forecasts underpin Hammond’s plan, said. Credit agency Moody’s, which stripped Britain of its AAA rating in 2013, said the new budget plan did not change its view that public debt would remain high for a long time, a reminder of the constraints facing Hammond. But he stressed the upside of getting a deal with Brussels, saying it would dispel uncertainty weighing on businesses and allow him to spend money he is holding back as a reserve in case of a no-deal shock. May’s problems in getting the Conservatives behind her Brexit strategy have raised concerns that Britain could leave the EU without a transition deal.

Hammond announced a new tax on the revenues of large tech firms from 2020 which would eventually raise 400 million pounds a year. He also confirmed increased spending on defence and roads, measures to help small retailers struggling to cope with online competition, and a plan to put more money behind welfare reforms criticised by the opposition. On income tax, Hammond brought forward by a year a higher threshold at which workers start to pay tax and he raised the level at which a higher rate kicks in. Hammond reiterated that the biggest increase in spending in his budget was announced four months ago when May said more money would go to the health service. The budget deficit was set to fall to 1.2 percent of gross domestic product in the current financial year, down from a forecast in March of 1.8 percent, he told parliament — a bigger drop than bond dealers polled by Reuters had expected. In total, borrowing between now and the 2022/23 financial year was forecast to be 18.5 billion pounds lower than in March forecasts by the OBR. More than half the improvement was due to come in the current financial year, reflecting Hammond’s future ramped-up spending plans.. Hammond and his predecessor George Osborne had made fixing the public finances their priority, a strategy that has helped bring down the budget deficit from almost 10 percent of GDP in 2010, but which has increasingly angered voters. But Hammond faces a struggle to meet his target of wiping out the deficit altogether by the mid-2020s if he does not raise a range of taxes, economists have said. By the 2023/24 tax year, the OBR said the public finances would remain in the red with a deficit of 0.8 percent of GDP.