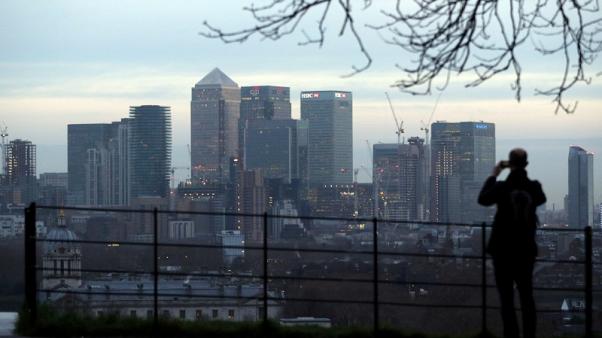 LONDON (Reuters) - British chief executives have turned more pessimistic about the growth outlook for the next few years, largely due to worries around economic nationalism and Brexit, a survey from accountants KPMG showed on Tuesday. Just 38 percent of chief executive officers think revenue will rise by 2 percent or more per year over the next three years, down from 47 percent in 2017 and 58 percent in 2016’s survey. Instead, 61 percent of company heads said they expected growth of between zero and 2 percent per year, up from 54 percent last year. Overall, KPMG’s report chimed with other business surveys that depict a muted outlook for businesses in the years ahead. A Bank of England survey of companies published last week showed investment intentions in services firms had weakened slightly, reflecting uncertainty around the terms of Britain’s departure from the European Union, due in March 2019. While the KPMG report showed companies in the United States, France and Japan had become more confident in the economic growth prospects of their countries, the opposite was true of Britain, Germany, Italy and Spain. “Many governments and businesses are still grappling with unforeseen developments, such as Brexit and the rise of economic nationalism, which are having a seismic impact on their decision-making,” Bill Michael, UK Chairman of KPMG, said. “A return to territorialism” was ranked as the biggest threat to growth by British company bosses, the survey showed. KPMG surveyed 150 chief executives in Britain as part of its wider annual survey of 1,300 company bosses around the world.