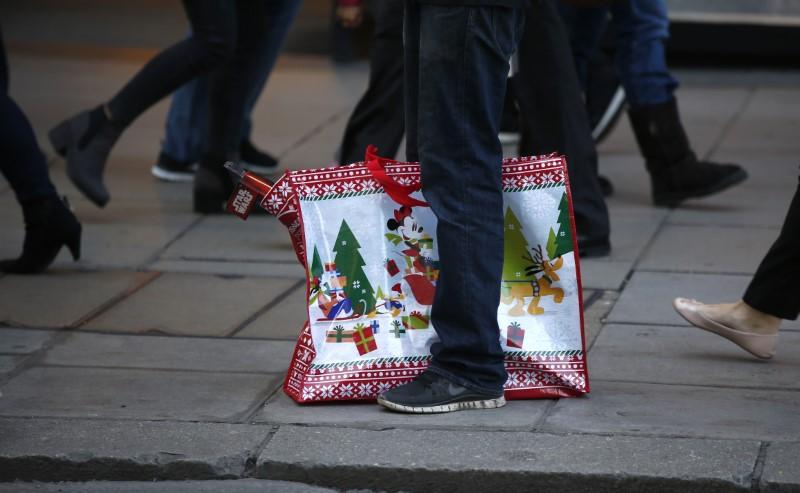 LONDON (Reuters) - Squeezed British consumers reined in Christmas travel plans and bought fewer new cars last month, setting the stage for the first fall in festive spending in five years, credit card company Visa said on Monday. The downbeat message came alongside a cut by the British Chambers of Commerce to its economic outlook for the next two years as the business organisation sees inflation rising faster than pay for the next two years. Visa said inflation-adjusted consumer spending last month was 0.9 percent lower than in 2016. This was a smaller decline than October’s 2.1 percent drop but still enough to make annual falls in spending likely for the first time since 2012 for both the Christmas season and 2017 overall, the company said. The biggest falls in spending came on expensive items such as cars and Christmas trips abroad, while cheaper luxuries such as beauty treatments and cosmetics saw gains. “People opt for smaller treats, at the same time tightening their belts when it comes to larger purchases,” Visa executive Mark Antipof said. Black Friday discounts in late November boosted online sales at the expense of physical stores, Visa added. British inflation has held at a five-year high of 3.0 percent since September, pushed up by the fall in the pound since June 2016’s Brexit vote, while wages have failed to keep pace. The British Chambers of Commerce, in a quarterly update to its economic outlook on Monday, said it expected this to persist throughout 2018. “Continued uncertainty over Brexit and the burden of upfront cost pressures facing businesses is likely to stifle business investment, while falling real wage growth is expected to continue to weigh on consumer spending,” BCC economist Suren Thiru said. The BCC cut its forecasts for 2017, 2018 and 2019, seeing growth of 1.5 percent this year, slowing to 1.1 percent in 2018 and only partially recovering to 1.3 percent in 2019. This is slightly below the average for economists polled by Reuters, who expect growth of 1.3 percent next year and 1.5 percent in 2019, when Britain is due to leave the European Union. On Friday, Britain and the EU agreed on a Brexit divorce deal, enabling them to begin talks about trade and a two-year transition period that will start when Britain leaves the bloc on March 29, 2019. But businesses said they would need to see a clear transition agreement as soon as possible for them to be able to put contingency plans on hold. Separately, jobs website Indeed said Britain remained by far the most popular EU location for cross-border job searches, although Germany, Ireland and Luxembourg had seen some gains over the past two years at the United Kingdom’s expense.