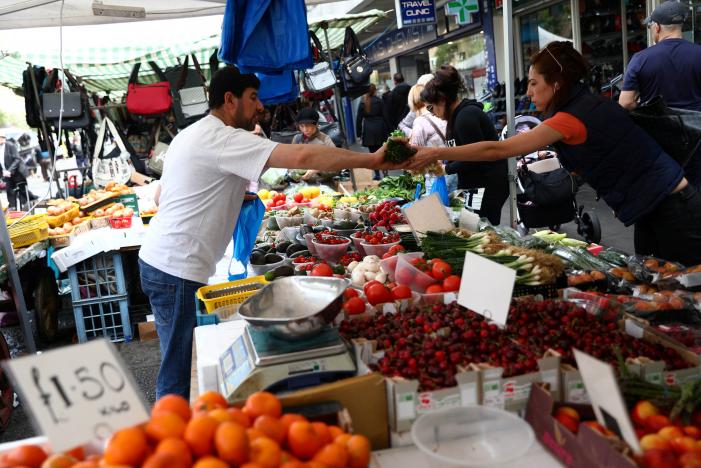 LONDON - The rise in inflation in Britain after the Brexit vote has made households the most downbeat about their finances in more than two years, and the giant services sector is also feeling the impact, surveys showed on Friday.

Consumers - whose spending is crucial to Britain's economy - are the least confident about their current financial situation since December 2014, and expectations about their finances over the next 12 months also fell, polling firm YouGov said.

Perceptions of job security were at a four-year low.

"It looks like this may be the point where the slowing GDP figures start to translate to people's everyday lives," Stephen Harmston, Head of YouGov Reports, said. "The figures indicate that they are starting to experience a downturn."

Britain is due to hold a national election on June 8 which the Conservative Party of Prime Minister Theresa May is expected to win, according to opinion polls.

May has sought to turn the election into a vote on her ability to secure a good deal for Britain as it leaves the European Union, pushing the economy into the background in the campaign.

YouGov said its overall measure of consumer confidence - which it produces with the Centre for Economics and Business Research - fell to its weakest level since the weeks just after the Brexit vote in June last year. The Confederation of British Industry said services firms were also suffering from the rise in inflation.

Demand in the services sector was flat in the three months to May, hurt by weaker consumer demand, and rising costs caused profitability to decline, a quarterly CBI survey showed.

"Rising inflation is squeezing household incomes, which is hitting demand in the consumer services sector," Rain Newton-Smith, the CBI's chief economist, said. "At the same time, cost pressures are building across the board, painting a difficult picture for services firms."

However firms expected to hire more workers and to continue to invest, the survey showed, and optimism among business and professional services firms improved for the first time since November 2015. -Reuters