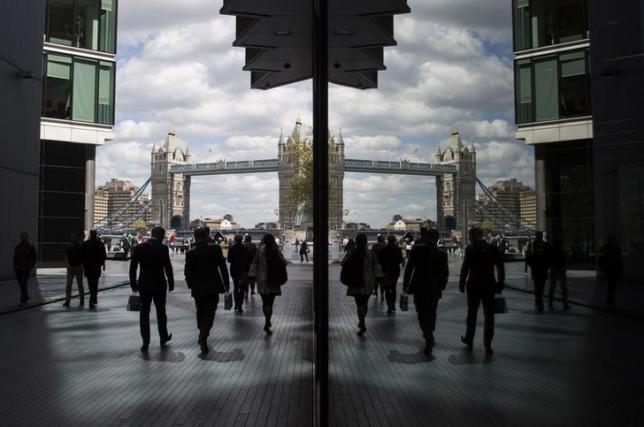 LONDON - Britain's current account deficit narrowed much more sharply than expected in the three months to June, while living standards rose at their fastest annual rate in more than five years, official figures showed on Wednesday. The Office for National Statistics made few changes to previous figures for headline economic growth, but new numbers on Britain's balance of trade and growth in household incomes eased some concerns about the shape of the recovery. Britain's current account deficit fell to 16.8 billion pounds in the second quarter of 2015 from 24.0 billion pounds in the first three months of the year, its lowest share of gross domestic product in two years at 3.6 percent and far below economists' forecasts. Real household disposable incomes were 3.7 percent higher on the year, their biggest increase since the first three months of 2010, driven by fastest annual rise in compensation for employees since 2007. The economy as a whole grew by 0.7 percent in the second quarter of 2015, unrevised from an estimate published on Aug. 28, while the year-on-year growth rate was revised down slightly to 2.4 percent. Growth in 2014 as a whole was revised down to 2.9 percent from 3.0 percent, which was nonetheless the highest rate since 2005, while first quarter 2015 growth was left unrevised at 0.4 percent. Wednesday's figures confirm Britain's economy grew robustly in the first half of this year, but shed less light on how badly the country is being affected by turmoil in China and other emerging markets which has hurt exports in recent months. British economic output is now 5.9 percent higher than before the financial crisis, but much of this reflects population growth over the past eight years, and per capita GDP is just 0.6 percent higher. The ONS revised down estimates of business investment, citing changes to calculations for small businesses, research and development and software. -Reuters