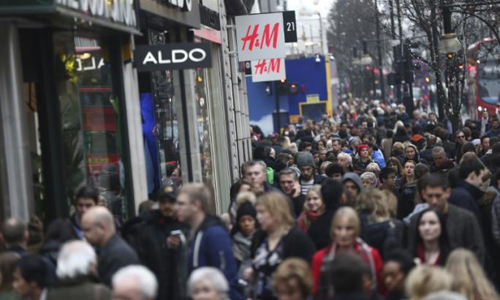 LONDON - British consumers brushed off June's Brexit vote and drove the economy to expand faster than expected in the third quarter, but a hefty current account gap and weaker trade and investment raised warning flags for 2017. The economy grew by 0.6 percent in the three months to September, above its long-run average and beating expectations in a Reuters poll of economists who expected the Office for National Statistics to stick with its earlier estimate of 0.5 percent. The ONS also revised down growth for the second quarter to 0.6 percent, meaning there was no slowdown at all following June's Brexit vote - confounding predictions at the time that the 'Leave' vote would push Britain's economy into recession. With the large services sector continuing to perform well in October, Britain's economy looks on track to expand by more than 2 percent this year - faster than almost all other big advanced economies except perhaps the United States. Sterling rose against the dollar after the data, having hit a seven-week low earlier in the day. But Friday's figures showed no sign that sterling's sharp fall after the referendum had boosted exports. The picture for trade worsened markedly and growth depended more on domestic consumer demand than previously thought. "Six months to the day after the Brexit vote, it is clear that 2017 is likely to be a challenging period for the economy, not least in assessing 'traditional' imbalances in the current account and the household sector," Investec chief economist Philip Shaw said. Economists polled by Reuters expect Britain's growth rate to more than halve next year to 1.1 percent. INFLATION SQUEEZES HOUSEHOLDS Household spending rose at a quarterly rate of 0.7 percent in the third quarter, but at the same time household incomes adjusted for inflation fell 0.6 percent - the biggest drop since early 2014. Households also ate into their savings, with the savings ratio dropping to its lowest in eight years. "With high inflation set to weigh further on spending power next year, the consumer is surely set to falter soon," said Martin Beck, economist at consultancy EY ITEM Club. Business investment also disappointed, with the ONS more than halving its estimate for investment growth in the third quarter to 0.4 percent. Net trade subtracted 1.2 percentage points from third quarter growth, the biggest drag since early 2012 and compared with an initial estimate that trade had offered a 0.7 percentage point boost to the growth rate. This reflected corrections the ONS recently made to trade data due to a miscalculation in the trade of gold. Britain's current account deficit widened to 25.494 billion pounds from a downwardly revised 22.079 billion pounds in the second quarter. While lower than the 27.45 billion pounds expected by economists, it caused the deficit to rise to 5.2 percent of gross domestic product from 4.6 percent - approaching a record 6.0 percent seen in late 2013. In the run-up to June's referendum, Bank of England Governor Mark Carney said Britain relied on the "kindness of strangers" to meet its financing needs - something that could fade if Britain became a less attractive investment destination. Some economists warn Britain could still be vulnerable if it looks like it will end up with a bad deal in its divorce from the European Union. -Reuters