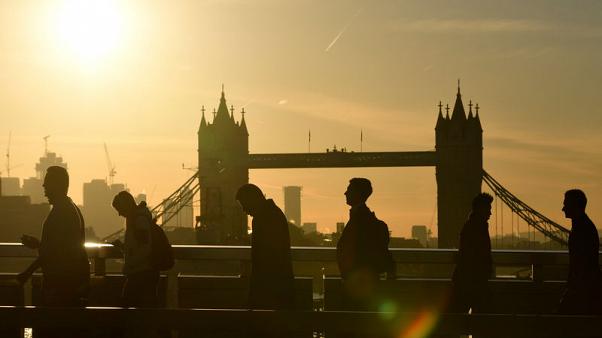 LONDON (Reuters) - British employers do not expect to increase the average pay settlements they offer to staff over the coming year, an industry survey showed on Monday, raising questions about whether pay will pick up as the Bank of England predicts. Employers plan to raise pay by 2 percent over the year to come, unchanged from the increase they planned three months earlier, the Chartered Institute of Personnel and Development (CIPD) said. Moreover, only around half of businesses experiencing recruitment and retention difficulties were raising pay to attract new staff or keep hold of existing ones, due to “wider productivity challenges and cost pressures”, the CIPD said. The CIPD’s data shows a similar pattern to other industry surveys, which report employers offering higher pay for people switching jobs but only modest increases for those who do not change post. Last month Bank of England chief economist Andy Haldane said he saw a “new dawn” for pay growth — which has undershot BoE forecasts in past years — shortly before a measure of earnings excluding bonuses rose at its fastest since 2009. The central bank forecast this month that growth in earnings including bonuses would pick up to 3.25 percent by late 2019 from an estimated 2.75 percent this year. Before the financial crisis, pay typically rose by more than 4 percent a year but the BoE has said years of weak productivity growth make a return to such rates a distant prospect. The CIPD also warned that Britain’s imminent departure from the European Union in March next year was already making it harder to recruit staff, due to a fall in the number of EU and other migrants seeking work in Britain. “The pendulum has swung away from the UK as an attractive place to live and work for non-UK born citizens,” CIPD labour market analyst Gerwyn Davies said. “Non-UK-born citizens and employers will be discouraged from using the post-Brexit (immigration) system if more support is not provided and it is not made simpler, fairer and more affordable, especially for lower-skilled roles,” he added.