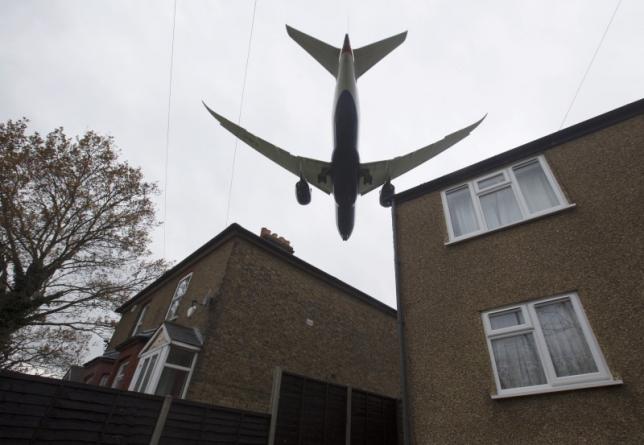 LONDON - British inflation rose more than expected in June and matched one of the highest rates seen over the last year and a half, boosted by a surge in airfares as soccer fans flocked to France for the Euro championships. Consumer prices, which are set to pick up speed soon after last month's vote to leave the European Union, rose 0.5 percent compared with a year ago, the Office for National Statistics said. Economists had expected 0.4 percent annual rise. The data was collected almost entirely before Britons voted to leave the EU on June 23, a result that caused sterling to plunge and raised expectations that inflation will rise sharply as Britain pays more for imported goods. British inflation has been below the Bank of England's 2 percent target for two-and-a-half years and last year it was zero, the lowest since comparable records began in 1950. "The rising cost of European air flights, possibly boosted by Euro football championships, was the biggest reason for this month's increase in inflation," ONS statistician Phil Gooding said. The cost of plane flights jumped by a record 10.9 percent between May and June, Gooding said. "The growing cost of oil, feeding through to petrol prices, also helped to nudge up CPI," he said. The 0.5 percent annual increase in CPI matched readings in March this year and December 2014. The last time inflation was higher than 0.5 percent was in November 2014. Sterling plunged to its lowest level against the dollar since 1985 after the June 23 Brexit vote. While the Bank of England expects this will cause inflation to rise because a weak pound will push up import costs, it looks set to loosen monetary policy next month to help cushion an expected slowdown. It will also release new inflation forecasts next month, which will include the impact of the vote to leave the EU. Economists with banks based in London have said inflation could peak as high as 5 percent next year. The median forecast in a Reuters poll conducted immediately after the referendum was for inflation to reach as high as 3 percent. An ONS measure of core consumer price inflation -- which strips out changes in the price of energy, food, alcohol and tobacco -- rose 1.4 percent compared with economists' expectations for it to rise slightly to 1.3 percent. Factory gate prices dropped by 0.4 percent compared with forecasts of a 0.5 percent annual drop. Prices paid by manufacturers for fuel and materials fell at the slowest pace since October 2013, down 0.5 percent year-on-year. The ONS also released figures for May house prices, which showed an 8.1 percent annual rise across the United Kingdom as a whole, the same as during April. Prices in London alone rose 13.6 percent, not as fast as earlier this year. Housing surveyors have said they expect house prices to fall after the shock of the EU referendum result. –Reuters