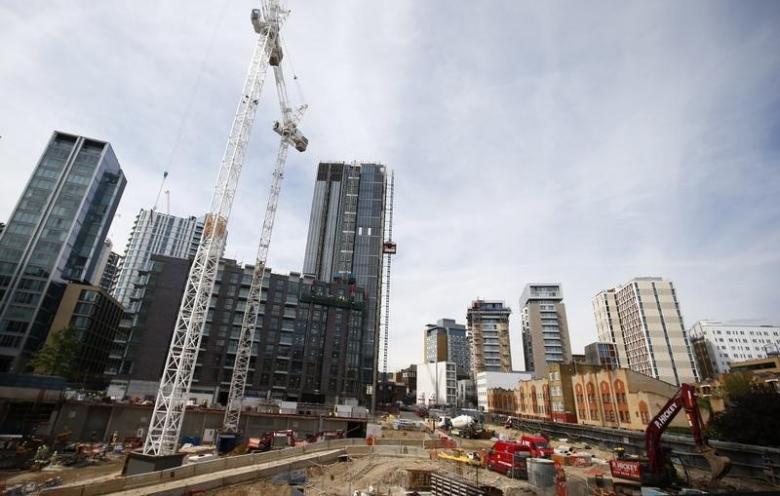 LONDON - British construction output held steady during the first full month after the June vote to leave the European Union, bucking expectations for a fall, while the trade deficit narrowed slightly, official data showed on Friday. Construction volumes were unchanged in July after a 1.0 percent drop in June, a smaller fall than the average 0.8 percent decline forecast in a Reuters poll, the Office for National Statistics said. But compared with a year earlier, volumes were 1.5 percent lower, the biggest drop since April 2013 though a smaller decline than the 3.2 percent economists had forecast. Friday's figures are the first official numbers on Britain's construction industry, which makes up 6 percent of the economy. They follow a closely watched survey of purchasing managers which pointed to the steepest decline in seven years in July, before rebounding in August. "Construction output remained steady in July with growth in infrastructure offset by falls in repair work and commercial buildings," ONS statistician Nick Vaughan said. "There was strong growth in construction orders, led by housing, after nearly two years of orders remaining relatively flat," he added. The ONS said there was very little anecdotal evidence that the vote to leave the EU had affected construction output. Britain's economy has shown signs of weathering the initial shock of the vote to leave the EU better than many economists had feared, but the Bank of England still expects construction to be one of the hardest hit sectors. Last month it predicted housing investment would slow sharply this year and fall by nearly 5 percent in 2017, and on Wednesday BoE Governor Mark Carney estimated overall economic growth during the current quarter would be half its second-quarter rate of around 0.6 percent. However, Britain's biggest house builder, Barratt Developments (BDEV.L), has defied predictions of a Brexit market freeze, saying sales had risen since the vote to leave the European Union. ONS figures on Friday showed new construction orders in the three months to the end of June were 8.6 percent higher than the previous quarter, the biggest rise since the second quarter of 2013. Private housing was up 28.2 percent on the quarter, the sharpest jump since 2010. Barratt's confidence echoed that of smaller rival Redrow (RDW.L) which said that sales had climbed 8 percent since June 30, and Persimmon (PSN.L) which last month said reservations of new homes had jumped. New finance minister Philip Hammond said on Thursday that boosting house-building was essential to lift the country's weak productivity growth. Separate figures released by the ONS on Friday showed Britain's trade deficit narrowed in July to 4.502 billion pounds from 5.573 billion in June. The deficit in goods alone narrowed to 11.764 billion pounds compared, almost exactly in line with economists' forecasts. Goods export volumes rose by 2.0 percent in July, while imports dropped by 3.6 percent. The ONS said it was too soon to know if the sharp fall in sterling after Britain voted to leave the EU was behind the rise in export volumes. -Reuters