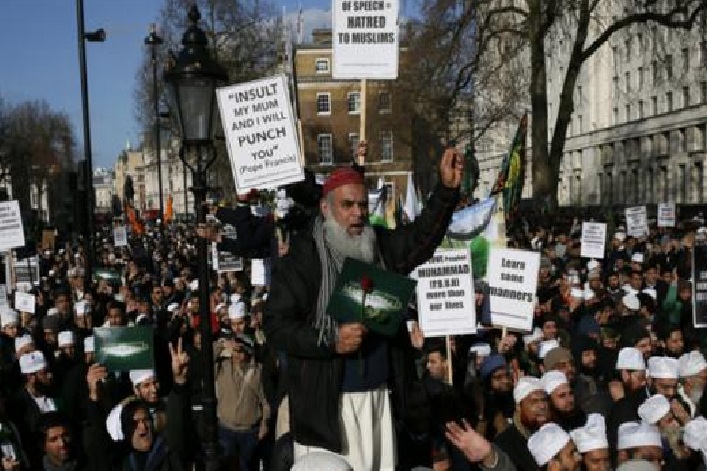 (Reuters) London - At least 1 000 British Muslims protested in central London on Sunday against what they called “insulting depictions” of the Prophet Mohammad by French newspaper Charlie Hebdo. The crowds gathered near Prime Minister David Cameron's office in London's Whitehall government district carrying placards with slogans such as “Stand Up For the Prophet.” The event comes weeks after 17 people were killed in three days of violence last month in France that began when two Islamist gunmen burst into Charlie Hebdo's Paris offices, opening fire in revenge for its publication of satirical images of Mohammad. Sunday's protest organisers condemned the Paris attacks, but said the magazine should not publish cartoons of the prophet. Imams delivered speeches and the crowds paused to pray before handing in an online petition to Cameron's office signed by over 100 000 Muslims. The petition, organised by a group called Muslim Action Forum, denounced those who had produced cartoons of the prophet, calling them “an affront to the norms of civilised society”. A leaflet circulated by the event's organisers said depictions of Mohammad by Charlie Hebdo and others was “a stark reminder” that freedom of speech was “regularly utilised to insult personalities that others consider sacred”. A group of around 10 far-right protesters looked on but the protest passed off peacefully.