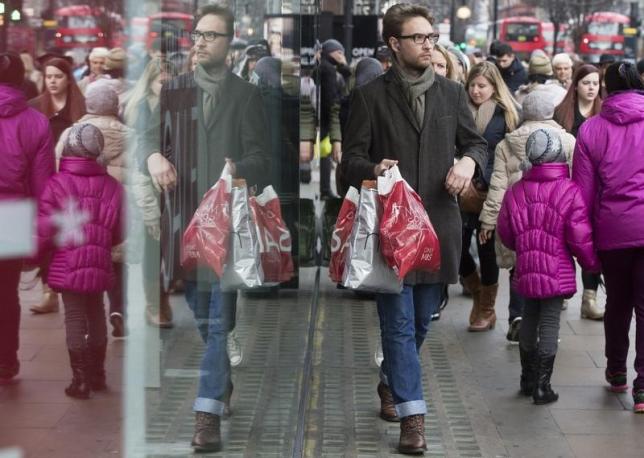 LONDON - British retail sales edged up in August after a weak couple of months, official data showed on Thursday, helped by sales of clothing particularly school uniforms. Retail sales volumes rose 0.2 percent on the month to show 3.7 percent growth on the year, having stalled in July and dipped in June in monthly terms, the Office for National Statistics said. Economists had expected retail sales to rise 0.2 percent and for sales to be up 3.8 percent compared with August last year. "Small stores were particularly boosted in August by sales of school uniforms, while most of the growth in large stores was coming from online," Kate Davies, head of retail sales statistics at the ONS said. Britain's economy relies heavily on consumer demand for growth. A pick-up in wage growth this year, combined with inflation hovering around zero, has helped restore some of the spending power lost in the years after the financial crisis. The Bank of England is keeping a close eye on wage growth and its impact on demand and inflation as it mulls its first rate hike in over seven years. The ONS said sales of textiles, clothing and footwear jumped 2.3 percent in August, the biggest jump since April, and was up 1.9 percent from a year ago. Sales volumes at food stores fell 0.9 percent last month, posing the biggest drag on the overall retail sales figures, but were up 0.8 percent from a year ago. ONS officials said retailers were reporting that the fall in food sales in August reflected large numbers of people going on holiday, even taking the usual seasonal adjustment into account. -Reuters