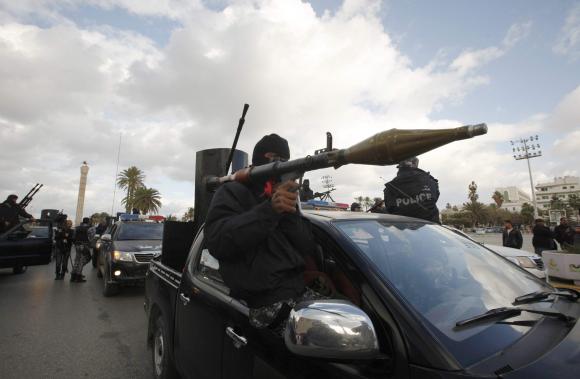 UNITED NATIONS (Reuters) - Britain said on Thursday that Libya needed a unified government before the United Nations Security Council could change an arms embargo in order to better equip Libya's military to combat Islamic State and other militants. The United States also believes "a political solution, one that is non-intervention, is the right path forward," said State Department spokeswoman Jen Psaki, adding that Washington supports the current arms embargo. Council member Jordan had circulated a draft resolution to the 15-member body on Wednesday, obtained by Reuters, that would remove conditions on the import of weapons by Libya's government and push for it to be supplied "necessary security assistance." "The problem is that there isn't a government in Libya that is effective and in control of its territory. There isn't a Libyan military which the international community can effectively support," British Foreign Secretary Philip Hammond said during a visit to Madrid. Britain and the United States have veto power on the Security Council. "The first condition has to be the creation of a government of national unity ... then the international community needs to rally very quickly around that government of national unity and ensure that it has the means to deal with the Islamist terrorism," Hammond said. The Libyan government is allowed to import weapons only with approval of a Security Council committee overseeing the embargo imposed in 2011 when forces of former leader Muammar Gaddafi cracked down on pro-democracy protesters. "We have supported, continued to support the UN approval process currently in place forLibya ... That continues to be our position," Psaki said, but added that the United States would discuss the draft resolution with council members. Libya has since descended into factional fighting. Two competing governments backed by militia brigades are scrambling for control of the oil-producing country. The chaos has created havens for Islamist militants. "Simply pouring weapons into one faction or the other, which is essentially what has been proposed, is not going to bring us to a resolution to the crisis in Libya," Hammond said. The UN is mediating, hoping to get the rival factions to create a unity government. The draft resolution asks a Security Council committee to come up with recommendations for an "enforcement mechanism" to stop the supply of arms to non-state actors in Libya.Egypt has called for a naval blockade to stop weapons reaching militants. The draft resolution "calls on Member States to combat by all means ... threats to international peace and security in Libya caused by terrorist acts and in coordination with the legitimate government in Libya." The draft text is under Chapter 7 of the UN Charter, which would make it legally binding. On Monday, Egypt carried out air strikes in Libya targeting militant camps, training sites and arms storage areas after Islamic State released a video showing the beheading of 21 Egyptian Christians.