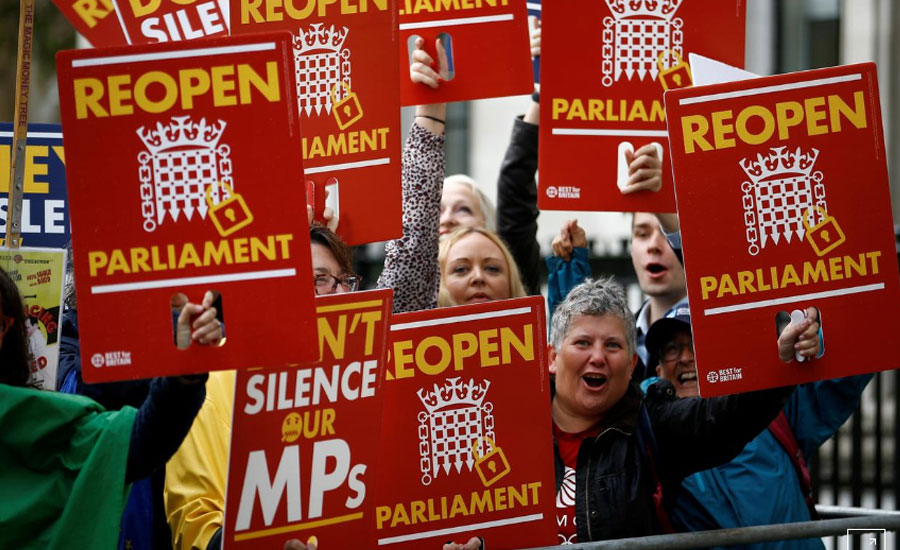 LONDON (Reuters) - The United Kingdom’s Supreme Court (SC) ruled on Tuesday that Prime Minister Boris Johnson had acted unlawfully when he advised Queen Elizabeth to suspend parliament weeks before Brexit - and that therefore the suspension was void. The ruling paves the way for legislators to return to parliament, where Johnson has no majority. It could give lawmakers, most of whom are opposed to leaving without the EU without a divorce agreement as he has threatened to do, further opportunity to impede his strategy. “The decision to advise Her Majesty to prorogue parliament was unlawful because it had the effect of frustrating or preventing the ability of parliament to carry out its constitutional functions without reasonable justification,” Supreme Court President Brenda Hale said. “Parliament has not been prorogued. This is the unanimous judgment of all 11 justices,” she added. “It is for parliament, and in particular the speaker and the (House of) Lords speaker, to decide what to do next.” Parliament was suspended, or prorogued in the British jargon, from September 10 to October 14. The prorogation was approved by Queen Elizabeth, Britain’s politically neutral head of state, on the advice of the prime minister. “I welcome the Supreme Court’s judgment that the prorogation of Parliament was unlawful,” said the speaker of the House of Commons, John Bercow. “As the embodiment of our Parliamentary democracy, the House of Commons must convene without delay. To this end, I will now consult the party leaders as a matter of urgency.” Some lawmakers, including those thrown out of Johnson’s Conservative Party for rebelling against his Brexit plans, had said he should resign if he was found to have misled the queen.