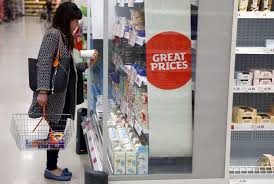 LONDON (Reuters) - Prices in shops in Britain (UK) rose by the most in nearly six years in January, but inflation is not a big risk as long as the country can avoid a no-deal Brexit, a group representing retailers said on Wednesday.
Shops increased prices by an 0.4 percent compared with a year earlier, the most since April 2013, the British Retail Consortium said. In December prices rose by an annual 0.3 percent. Retailers have been holding prices down in the face of tough online competition and faltering consumer confidence as Britain approaches the date when it is due to leave the European Union. Despite the gradual increase in shop prices over the past four months, the BRC said consumers had little to fear from inflation as the underlying upward pressure on prices was easing. “That is unless the UK leaves the EU without a deal on March 29, leading to increases in the price of many goods in the weekly shopping basket,” BRC chief executive Helen Dickinson said. Prime Minister Theresa May is struggling to rally her own Conservative Party behind her plans for taking Britain out of the European Union in less than two months’ time, raising fears of border delays and a fall in the value of the pound that would make imports more expensive. Food price inflation held at an annual rate of 1.5 percent in January despite a faster increase in the cost of perishable items. Non-food prices showed the fell by the smallest amount since March 2013, dropping by 0.3 percent. Britain’s official measure of consumer price inflation stood at 2.1 percent in December, a touch above the Bank of England’s 2 percent target. The BoE expects inflation to drift down as it raises interest rates gradually. Separately on Wednesday, a survey showed confidence among employers about Britain’s economic outlook and about their hiring and investment decisions sank to their joint-lowest levels since June 2016, the month of the Brexit referendum.

US tax cut has little impact on firms' investments

“The business community is united in wanting a no deal Brexit off the table,” said Neil Carberry, chief executive of the Recruitment and Employment Confederation, which commissioned the survey, which took place between Sept. 25 and Dec. 19. The survey showed companies expected to hire more permanent staff but the resilience of the labor market would not defy the effects of deep uncertainty about Brexit indefinitely, Carberry said.