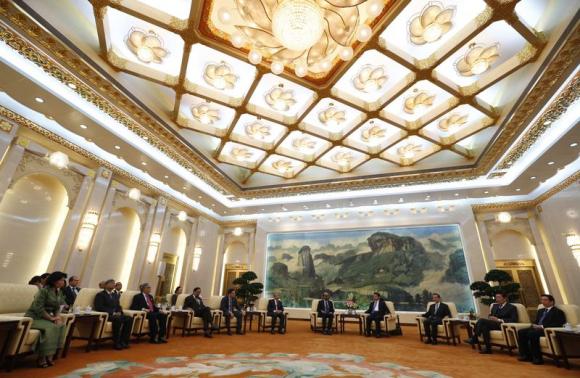 LONDON – Britain said it has sought to become a founding member of the Asian Infrastructure Investment Bank (AIIB), making it the first Western nation to embrace the China-backed institution, but the United States reacted frostily to the development. The AIIB was launched in Beijing last year to spur investment in Asia in transportation, energy, telecommunications and other infrastructure. Analysts have said it could challenge the Western-dominated World Bank and Asian Development Bank. However, Britain's finance ministry said on Thursday that the AIIB could complement work already done in the region by those organizations. Britain would meet other founding members this month to agree on the principles of the bank's governance and accountability arrangements, the ministry said. Finance minister George Osborne said joining the bank would boost the country's push to foster business and investment ties with countries in the region, chief among them China. "Joining the AIIB at the founding stage will create an unrivalled opportunity for the UK and Asia to invest and grow together," he said in a statement. Britain's announcement was not welcomed in Washington. A spokesman for the White House National Security Council said the United States had concerns about whether the AIIB would have sufficiently high standards on governance and environmental and social safeguards. "It is important to note that countries that become prospective members of the AIIB will be responsible for the standards adopted in the articles of agreement and their implementation," the spokesman said. "This is the UK’s sovereign decision. We hope and expect that the UK will use its voice to push for adoption of high standards," he said. China's Ministry of Finance said it welcomed Britain's decision, and would consult with the AIIB's existing founding members on its proposed entry. "If all goes well, the UK will become a founding member of the AIIB by the end of March," it said in a statement on its website. The articles of agreement of the AIIB, which will include its shareholding and lending strategy, will not be finalised until the end of 2015, Chinese officials have said. Twenty one countries were represented at the announcement of the bank in October - Bangladesh, Brunei, Cambodia, China, India, Kazakhstan, Kuwait, Laos, Malaysia, Mongolia, Myanmar, Nepal, Oman, Pakistan, the Philippines, Qatar, Singapore, Sri Lanka,Thailand, Uzbekistan and Vietnam. Indonesia later said it would join, and China said earlier this year the number of founder members had risen to 26. But Japan, Australia and South Korea, the other notable absentees in the region, have not yet announced any decision. Japan, China's main regional rival, has the highest shareholding in the Asian Development Bank along with the United States, while Australian media said Washington put pressure on Canberra to stay out. Vice Finance Minister Joo Hyung-hwan told reporters on Thursday that South Korea was still in discussions with China and other countries about its possible participation. Sources in the finance ministry said South Korea is undecided because its concerns about governance and operational transparency had not been addressed. One source, who has direct knowledge of the discussions, said one of the concerns for South Korea was that the country would not be given sufficient representation in the bank. "China is reported to be holding 50 percent," the source said. "And if that's the case, there's a likelihood that Korea will end up being a minor member."