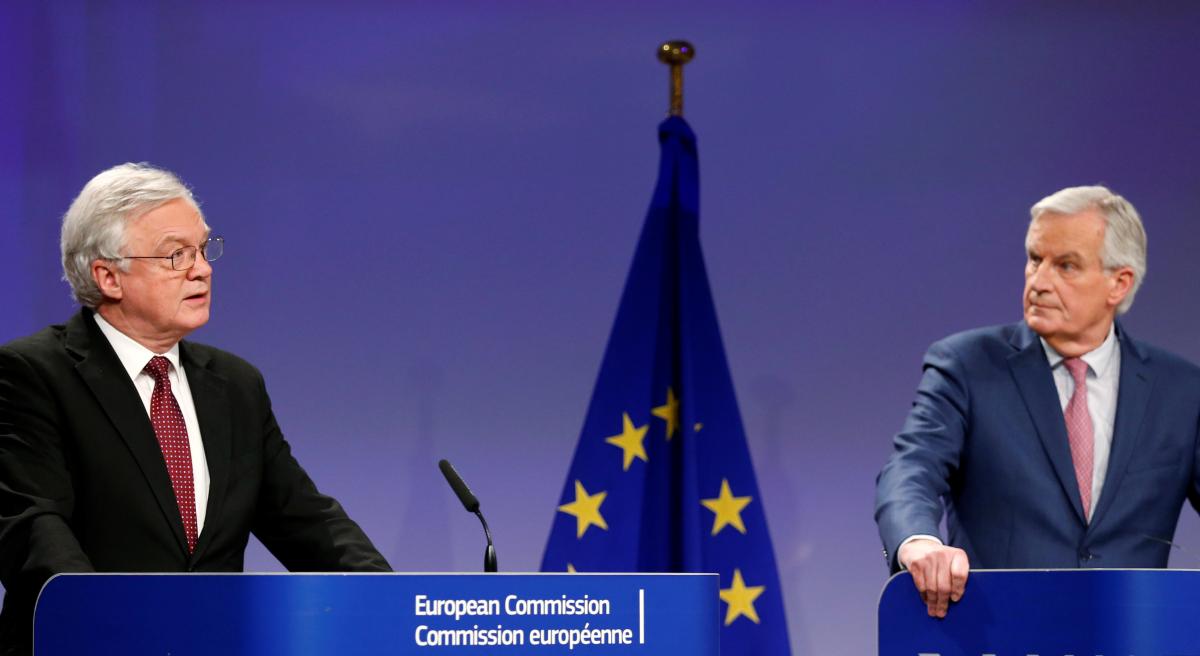 BRUSSELS (Reuters) - Britain and the European Union agreed on Monday to a transition period to avoid a “cliff edge” Brexit next year , though only after London accepted a potential solution for Northern Ireland’s land border that may face stiff opposition at home.

The pound surged on confirmation that Britain would remain effectively a non-voting EU member for 21 months until the end of 2020. Some business leaders, however, echoed a warning from EU negotiator Michel Barnier that the deal is legally binding only if London agrees the whole withdrawal treaty by next March.

That means solving outstanding issues, notably how to avoid a “hard border” that could disrupt peace in Northern Ireland. Britain says an EU-UK free trade deal to be sealed by 2021 can do that. But Dublin insists the Brexit treaty must lock in a “backstop” arrangement in case that future pact does not work.

Both sides are committed to keeping a free flow of people and goods over the intra-Irish border without returning to checkpoints, as during the three decades of violence in Northern Ireland. However, finding a practical solution for any customs checks needed post-Brexit has proved elusive so far.

The dispute with Ireland had threatened to derail May’s hopes of a formal political endorsement of the transition deal by EU leaders when they meet in Brussels on Friday. A weekend of intensive talks, however, has broken the deadlock for now.

Prime Minister Theresa May, who relies on pro-British Northern Ireland members of parliament to pass her Brexit legislation, had rejected a fallback proposed by Brussels three weeks ago. She said an EU offer to keep Northern Ireland under EU trade rules would isolate the province from the mainland.

However, her Brexit Secretary David Davis, in Brussels, has now signed up to following similar principles as negotiators resume work to find an “operational” compromise. Dublin said it was happy to accept as it bound London in to not “backsliding” on pledges May had made on the issue in December.

“We agree on the need to include legal text detailing the ‘backstop’ solution for the border,” Davis told a news conference with Barnier. “But it remains our intention to achieve a partnership that is so close as to not require specific measures in relation to Northern Ireland.”

The question will remain as to whether negotiations on the future trade partnership between Britain and the EU, which are expected to start only next month after EU leaders endorse Barnier’s negotiating guidelines on Friday, can produce results — and quickly enough to avoid having language in the withdrawal treaty that Britain, and May’s Belfast allies, cannot accept.

Her Democratic Unionist Party allies said the “announcement” did not concern them as it left the border issue unresolved.

Davis agreed with Barnier that Monday’s agreement was “decisive” and increased the odds on finding an orderly deal to avoid Europe’s second biggest economy simply crashing out of the bloc in just over a year. He hailed the certainty that the deals on the transition and other issues, including rights for expatriate citizens, would offer businesses and individuals.

However, Barnier warned: “A decisive step remains a step; we are not at the end of the road and there still remains a lot of work to be done, including on Ireland and Northern Ireland.”

The two sides issued a new, 129-page draft withdrawal treaty that was awash with green highlighter denoting final agreement on large areas of the legal text, including transition. Diplomats put the level of “green” agreement at over 80 percent.

Davis, who unlike May campaigned for Brexit, said he was pleased with EU agreement to let Britain negotiate and sign trade deals with other countries while remaining covered by EU common trade policy during the transition. Those deals would then take effect once Britain was free to do so in 2021.

He also welcomed wording that gives Britain some say in EU policy during the transition, notably on fishing quotas, and an ability to refuse to implement things it did not agree with  some of his Conservative party allies have complained that the transition deal would leave Britain a “vassal state” of the EU.

The Leave Means Leave campaign accused him of “caving in” on the Irish border. Brexit firebrand Nigel Farage said “Theresa the Appeaser” had “let people down again” by agreeing to EU demands to keep free immigration during the transition.

More troublingly for May’s prospects of steering the treaty through parliament, her own party’s leader in Scotland, fierce Brexit critic Ruth Davidson, said the transition was a bad deal for letting the EU retain power over British fishing grounds.

The EU secured agreement that Britain would offer residence rights to EU citizens who arrive after Brexit but before 2021. However, Britain also notched some gains it had pushed for.

The 27 other EU member states have remained closely aligned, though they have differing interests which diplomats say are starting to emerge in discussions about future trade. All have backed Irish demands on the border, although some of Britain’s nearest neighbours, with most trade to lose from Brexit, also pushed for a quick transition deal to help their own businesses.

But many EU diplomats said they felt London had largely agreed to their terms on most issues because of May’s political imperative to get a transition deal that may calm the fears of businesses contemplating moving investments out of Britain.

One EU diplomat said: “The Brits have just given in on everything, so big was their drive to get the transition.”