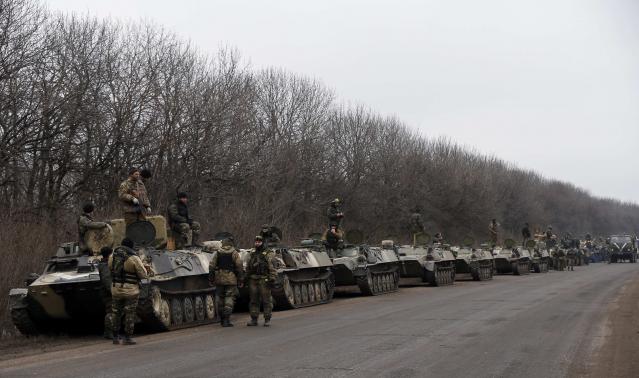 KIEV (Reuters) - Ukraine announced on Thursday that it would begin withdrawing artillery from the front line with separatist rebels in the east, a move that amounts to recognition that a ceasefire meant to take effect on Feb. 15 is holding at last. The pro-Russian rebels have already been pulling back heavy weapons for two days, but Kiev had held back, arguing that fighting had not yet ceased. However, the army reported no combat fatalities at the front for a second straight day on Thursday, the first time no troops have been killed since long before the French- and German-brokered truce was meant to take effect. The withdrawal of artillery is "point two" of a Feb. 12 peace agreement reached in the Belarus capital Minsk, so beginning it amounts to an acknowledgement that "point one" - the ceasefire itself - is being observed. "Today Ukraine has begun the withdrawal of 100 millimeter guns from the line of confrontation," the military said in a statement, saying the step would be monitored by the Organization for Security and Cooperation in Europe. "The Ukrainian side demands a full ceasefire and immediate implementation of the Minsk agreement by all signatories. In the event of any attempted offensive, the schedule for withdrawal can be reviewed," the military statement said. "Ukrainian forces are fully prepared to defend the country." Reuters journalists in rebel-held Donetsk said they had heard not a single artillery explosion throughout the night. The separatist rebels initially ignored the truce last week to launch an advance that led to one of the biggest battles of a war that has killed more than 5,600 people. But since capturing the strategic town of Debaltseve, where the rebels said the truce did not apply, they have taken pains to emphasize that they now intend to abide by it. Western countries denounced the rebels and their presumed sponsor, Russian President Vladimir Putin, for advancing on Debaltseve after the truce was meant to take effect. But they have since held out hope that the ceasefire will now hold, with the rebels having achieved that objective. In the days after its troops were driven from Debaltseve, Kiev maintained that it believed the rebels were reinforcing for another advance, particularly expressing fear for the city of Mariupol, a port of 500,000 people. Western countries have threatened to impose new economic sanctions on Moscow if the rebels advance further into territory the Kremlin calls "New Russia". Moscow, which denies aiding its sympathizers in Ukraine, said on Thursday the threats of more sanctions were cover for Western efforts to undermine the truce. "It's an attempt to ... distract attention from the necessity to fulfill the conditions of the Minsk agreements," Foreign Minister Sergei Lavrov said. [caption id="attachment_5463" align="alignnone" width="500"] 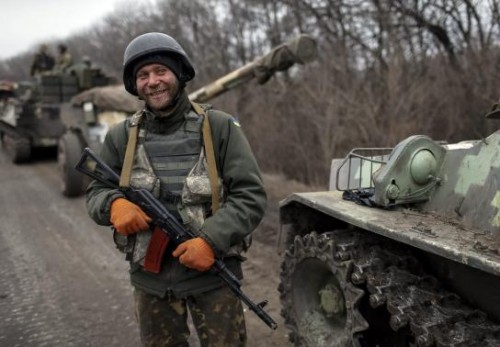 A member of the Ukrainian armed forces and armoured personnel carriers smiles as they prepare to move to pull back from Debaltseve region, near Artemivsk February 26, 2015.[/caption]