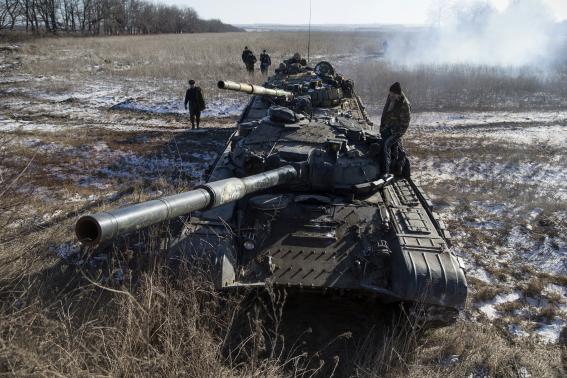 KIEV (Reuters) - Ukrainian President Petro Poroshenko has called for U.N. peacekeepers to be deployed to monitor a ceasefire in east Ukraine, a proposal that pro-Russia rebels swiftly said would be in breach of a peace deal. At an emergency meeting late on Wednesday, Ukraine's national security and defense council approved Poroshenko's request, a clear sign of Ukraine's concerns after pro-Russian rebels seized a town after a ceasefire took effect on Sunday. "The best format for us is a police mission of the EU," Poroshenko said according to a statement on his website. "It will be the most efficient guarantor of security in the situation when the word of peace is not observed either by Russia or by those who are supported by it." Ukraine pulled thousands of troops out of the east Ukrainian town of Debaltseve on Wednesday after failing to stop an offensive by Moscow-backed rebels who said the railway hub was not part of last week's ceasefire. The rebels denounced Poroshenko's call for peacekeepers, saying their presence would "violate" the ceasefire, negotiated in marathon talks by France, Germany, Russia and Ukraine in the Belarussian capital Minsk late last week. "This is an actual violation of the package of measures to implement the Minsk agreement," Denis Pushilin, a senior separatist figure, was quoted as saying by Russia's RIA news agency. "And so we have a very negative attitude to this. Moreover we are ready to address the heads of state who were guarantors that Ukraine would meet its commitments." Russia's ambassador to the United Nations was also quoted as saying that Poroshenko's proposal put into doubt Ukraine's resolve to fulfill the Minsk agreements.