Ukraine military, rebels accuse each other of increased attacks 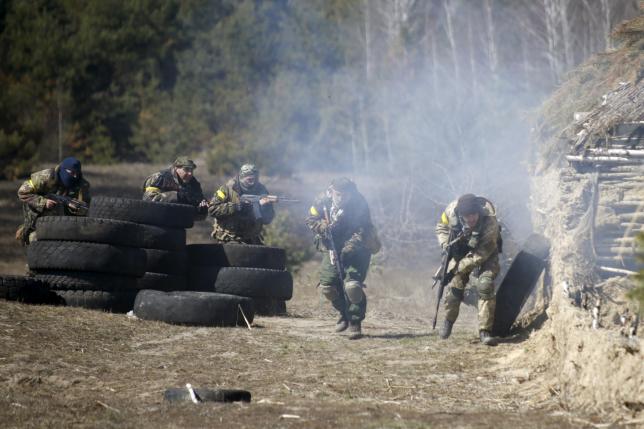 Ukraine military, rebels accuse each other of increased attacks

KIEV - Ukraine's military and pro-Russian rebels accused each other on Friday of intensifying attacks in separatist eastern territories despite a two-month-old ceasefire deal. The conflict has reached stalemate in recent weeks with the truce, brokered in the Belarussian capital of Minsk in mid-February, still technically in force though casualties are reported almost daily. "The enemy has significantly intensified firing on our positions from weapons that according to the Minsk agreement are meant to have been withdrawn," Kiev's military spokesman Andriy Lysenko said in a televised briefing, adding that the majority of attacks had taken place around the airport of rebel-held Donetsk. He said in the past 24 hours rebels had fired at government troops 18 times with weapons of between 120 mm and 122 mm caliber. According to the Mink deal, weapons bigger than 100 mm caliber, including large artillery, heavy mortar and powerful rocket systems, are meant to have been withdrawn from the frontline. The conflict erupted a year ago when rebels opposed to a new pro-Western leadership in Kiev and the ousting of a Moscow-backed president occupied state buildings in two big cities of Ukraine's Russian-speaking east, Donetsk and Luhansk. More than 6,000 civilians, rebels and Ukrainian servicemen have been killed since then in a crisis in which Kiev has accused its former Soviet master of arming and supporting the rebels, a charge Moscow denies On the rebel side, separatist forces accused government troops in the town of Avdiivka of firing from tanks at rebel positions near Donetsk airport about 7 km (4.4 miles) away, rebel news agency DAN reported early on Friday. Ukrainian military spokesman Vladislav Seleznyov said it was not possible for government troops to fire tank rounds that distance. "For that ... heavy artillery systems would be needed and we have withdrawn them," he told Reuters by phone. The Ukrainian military said none of its servicemen had been killed in the past 24 hours, although two were wounded by a landmine. - Reuters