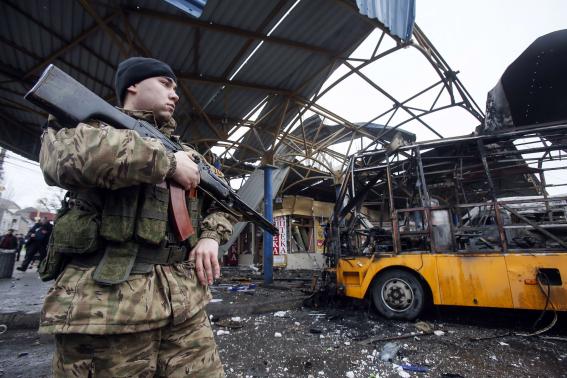 DONETSK (Reuters) - The leaders of France, Germany, Russia and Ukraine were due to attend a peace summit on Wednesday, with Ukraine's pro-Moscow separatists tightening the pressure on Kiev by launching some of the war's worst fighting in an assault on a government garrison. The Kiev army said 19 of its soldiers were killed in a day of pro-Russian separatist assaults at a single location near the railway hub of Debaltseve, some of the worst losses it has reported in nine months of war. Rebels who tore up a five-month-old truce in January are trying to encircle government forces in Debaltseve, a strategic location that would let them link up their main strongholds. Fighting has already killed more than 5,000 people, and Washington is now openly talking of arming Ukraine to defend itself from "Russian aggression", raising the prospect of a proxy war in the heart of Europe between Cold War foes. The summit is being held in neighbouring Belarus under a Franco-German proposal to try to halt the fighting. Chancellor Angela Merkel and President Francois Hollande will meet Ukraine's Petro Poroshenko and Russia's Vladimir Putin. Hopes for a breakthrough appear slim and would depend on Ukraine making most of the concessions, with advancing rebels unlikely to agree to halt and go back to previous positions. A surge in fighting in the 24 hours before the leaders were to gather, including a rocket attack that killed 11 people deep in government-held territory on Tuesday, could be intended to force Poroshenko to accept a deal recognising the rebel advance. That all four leaders would attend was only firmly confirmed on the final day. "There are a number of problems which remain to be resolved ... but it is very likely to go ahead," French Foreign Minister Laurent Fabius told France Inter radio. "It is really a last-chance negotiation." Still, Moscow expressed optimism. A Russian diplomatic source said it was 70 percent likely that an agreement would be reached. "The presidents aren't travelling (to Minsk) for no reason," the source said. Foreign Minister Sergei Lavrov said there had been progress in the run-up to the summit but Kiev could be holding back a deal by insisting on control of the Russian-Ukrainian border, part of which is held by the separatists. The talks are taking place while an International Monetary Fund mission is trying to negotiate a bailout to save Ukraine from bankruptcy brought on by corruption and mismanagement as well as war. Prime Minister Arseny Yatseniuk said the talks were tough but he hoped for a loan deal within days. ADVANTAGE Kiev and NATO accuse Russia of supplying separatists with men and weapons. Moscow denies it is involved in fighting for territory Putin calls "New Russia". If the French and German leaders were hoping their peace initiative would be met by conciliatory moves on the ground, the prospect of talks appears to have triggered the opposite, with the pro-Russian rebels determined to drive home their advantage. Armoured columns of Russian-speaking soldiers with no insignia have been advancing for days around Debaltseve. Last week they captured the small town of Vuhlehirsk next to Debaltseve, and a reconnaissance unit was there on Tuesday salvaging equipment from abandoned Ukrainian trenches. The squad's commander said his men did not want a truce while they had government forces on the run. On the Russian side of the border, Moscow announced war games on Tuesday on the eve of the talks. The United States has been openly discussing arming the Ukrainian government, a move that is opposed by European allies who say it would escalate the conflict while falling far short of giving Kiev the firepower needed to win. President Barack Obama says he has yet to make up his mind on the question of sending weapons. He spoke by phone overnight to Putin, and the White House said he warned the Russian leader that the costs would rise if Moscow kept aiding the separatists. Kiev military spokesman Vladyslav Seleznyov, briefing journalists on rebel attempts to encircle government forces holding Debaltseve, said the 19 soldiers had been killed "in shelling, rocket attacks and military clashes". Poroshenko visited Ukraine's military headquarters in the government-held town of Kramatorsk overnight, where seven civilians and four soldiers were killed by rockets fired at a target that was nowhere near the front line. "This is a crime against humanity. This is almost 50 km from the front line and the Russian-backed rebels and terrorists attacking civilians, attacking the peaceful city of Kramatorsk. This is absolutely unacceptable," he said. In separatist-held territory, one person was killed on Wednesday when a shell hit a bus station in the city of Donetsk, east Ukraine, a Reuters witness said. The body of a man could be seen behind the wheel of a minibus after the shell fell through the roof of the station, burning up the vehicle and another beside it. Emergency services at the scene said another person had died in hospital following the attack, while two people were seriously wounded. There was no immediate comment from rebel authorities or the Kiev-controlled regional administration.