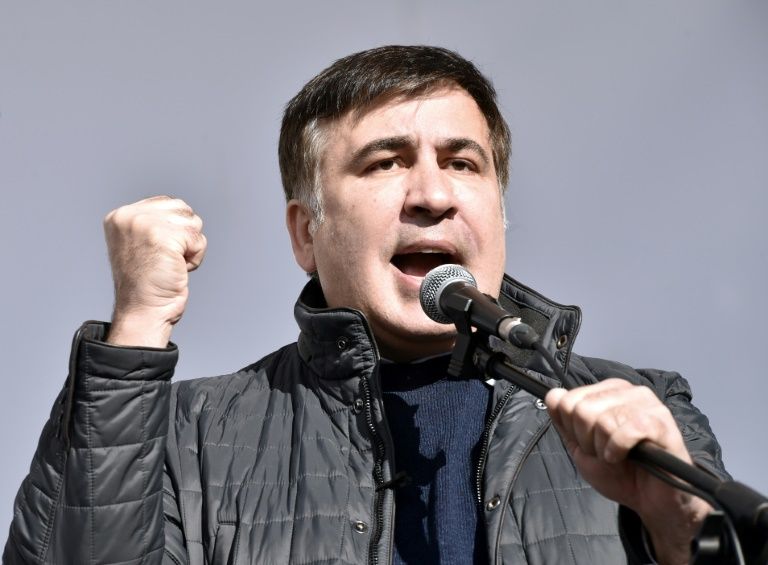 Prosecutor General Yuriy Lutsenko said the 49-year-old anti-corruption campaigner was arrested on charges of trying to stage a coup sponsored by Russia.

"We are planning to conduct an investigation and ask the court to set a bail hearing," Lutsenko wrote on Facebook.

Around 100 supporters of Saakashvili, the man who pulled Georgia out of Russia's orbit in a 2003 revolution before becoming a governor in Ukraine, gathered outside a police detention centre shouting "shame".

Interior ministry adviser Anton Gerashchenko said a Kiev court had 72 hours to decide whether to place Saakashvili in pretrial detention.

A judge also has the option of placing him under house arrest or releasing him on bail.

Saakashvili dramatically escaped from a security service van on Tuesday after it was swarmed by hundreds of supporters angered at his detention.

He has since continued leading protests outside parliament demanding Poroshenko's impeachment over his failure to fight high-level corruption.

Saakashvili denies committing any crimes and says his actions have been peaceful and legal.

Tuesday's drama marked the latest chapter in the dizzying career of a man who spearheaded a pro-Western "Rose Revolution" in Georgia in 2003 and fought a disastrous war with Russia five years later that eventually prompted him to flee the small Caucasus country.

Saakashvili returned to the spotlight as a vocal champion of the three-month street uprising in Kiev that toppled a Moscow-backed government in 2014 and turned Ukraine on a pro-EU course.

Poroshenko rewarded Saakashvili for his efforts by appointing him governor of the important Black Sea region of Odessa in 2015.

But an ugly falling out between the two men saw Saakashvili stripped of his Ukrainian passport -- only for him to defy the authorities and force his way back into the conflict-riven country with the help of supporters in September.

"I don't exclude that the inquiry may ask for extra expertise, including from international organisations, to enhance trust," Poroshenko told reporters in Vilnius at a joint press conference with Lithuanian President Dalia Grybauskaite.

"He (Saakashvili) has to answer to investigators and to society regarding the accusations against him," Poroshenko

"If he doesn't answer, it only means that these accusations are well-founded."