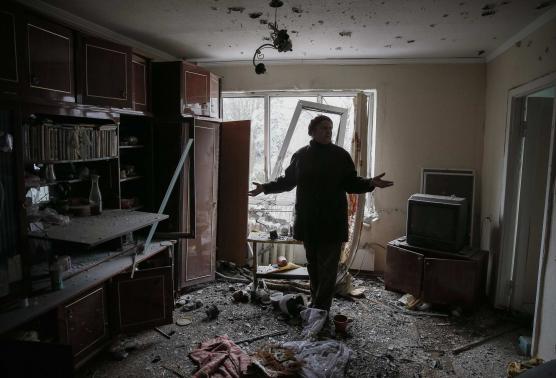 (Reuters) - Ukraine's rebels disavowed a new truce on Sunday hours after it took effect, saying it did not apply to the town where most fighting has taken place in recent weeks. Guns fell abruptly silent at midnight across much of easternUkraine in line with the ceasefire agreement, but the pro-Russian rebels announced that they would not observe the truce at Debaltseve, where Ukraine army forces have been encircled. "Of course we can open fire (on Debaltseve). It is our territory," Eduard Basurin, a senior rebel commander, told Reuters. "The territory is internal: ours. And internal is internal. But along the line of confrontation there is no shooting." Reuters journalists in nearby towns heard volleys of artillery from the direction of Debaltseve in the morning after a night that had been mostly quiet. Ukrainian forces have been holding out in the town for weeks, astride a railway junction in a pocket between the two main rebel strongholds. Washington says Russia's regular military, armed with tanks and missile launchers, carried out an operation in the days before the truce to encircle Debaltseve. Reuters journalists have seen armored columns of troops without insignia arriving in the area in recent days. Elsewhere in eastern Ukraine the ceasefire was met by abrupt silence at midnight. Reuters journalists in Donetsk, the main rebel stronghold, said artillery bombardment halted and they heard no firing overnight, after intense final hours before the ceasefire when shells had exploded every few seconds. A Reuters photographer in government-held territory also said constant bombardment had halted overnight, although he heard a volley of artillery around 7 a.m. from the direction of Debaltseve. The Ukrainian government said on Sunday morning that the ceasefire was being "generally observed". Its forces had been shelled 10 times in the hours since the truce took effect, but it described those incidents as "localized" rather than regular. Nine of its soldiers were killed on Saturday but none since the truce took effect, a spokesman said on Sunday morning. Hennadiy Moskal, the head of the Kiev-controlled administration for Luhansk, one of the rebellious provinces, said most hot spots had been quiet but a complete ceasefire had not come into effect. A Ukrainian staff officer stationed near Debaltseve said: "The general level (of attacks) has decreased, although there are violations." Ukraine's President Petro Poroshenko, wearing the uniform of the armed forces supreme commander, said in a midnight televised address in the capital Kiev that he had ordered troops to stop firing in line with the truce. He said there was still alarm over the situation around Debaltseve. The ceasefire, negotiated in four-power talks on Thursday, foresees creation of a neutral buffer zone and withdrawal of heavy weapons. More than 5,000 people have been killed in a conflict that has caused the worst crisis in Russia-West relations since the Cold War. "NEW RUSSIA" Russian President Vladimir Putin denies Moscow is involved in fighting for territory he calls "New Russia". Western officials cite overwhelming evidence to the contrary and Washington and its allies have imposed economic sanctions on Moscow. Poroshenko said that if Ukraine were slapped once, it would not offer the other cheek. But, seated alongside armed forces chief of staff Viktor Muzhenko, he added: "I very much hope that the last chance to begin the long and difficult peaceful process for a political settlement will not be wasted." In the hours leading up to the ceasefire, heavy artillery and rocket fire roughly every five seconds had reverberated across Donetsk, the main regional city in the east which is under the control of the secessionists. Ukrainian authorities said two civilians were killed by shells that hit a town minutes past midnight. U.S. Secretary of State John Kerry urged implementation of the ceasefire in a telephone call with his Russian counterpart Sergei Lavrov and expressed concern about efforts by Russiaand the separatists to cut off Debaltseve. U.S. President Barack Obama expressed "deep concern" about the violence around Debaltseve prior to the ceasefire, in a telephone call with Poroshenko, the White House said. Obama also spoke to German chancellor Angela Merkel, who negotiated the ceasefire along with President Francois Hollande of France at all night talks with the leaders of Ukraine andRussia. The Kremlin said the four leaders who negotiated the truce would continue to speak by phone. Maxim, a rebel fighter at a checkpoint on a road from Donetsk to government-held Dnipropetrovsk, told Reuters it was indeed quiet but he did not expect the ceasefire to hold. "Truce? I doubt it. Maybe 2-3 days and then they will start shooting again. This is all for show. The OSCE is driving around here, so of course they are being quiet," he said. The Organization for Security and Cooperation in Europe has monitors to observe the truce. The U.S. State Department, pressing its case that Russia was backing the rebels in the latest fighting, on Saturday released commercial photographs that spokeswoman Jen Psaki said showed "the Russian military has deployed large amounts of artillery and multiple rocket launchers around Debaltseve, where it is shelling Ukrainian positions." "We are confident that these are Russian military, not separatist systems," she said.