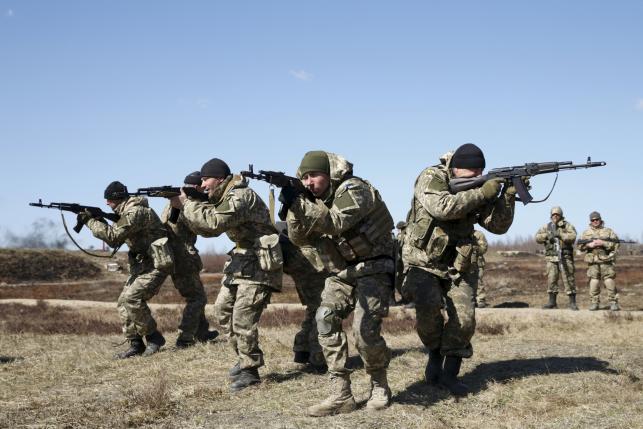 KIEV - Ukraine, locked in conflict with Russian-backed separatists in its east, on Thursday drew up a new security doctrine denouncing Russia's "aggression" and setting its sights on joining the US-led NATO military alliance. Oleksander Turchynov, head of the national security council, told a session of the body that Ukraine saw Russian aggression as a "long-standing factor" and viewed NATO membership as "the only reliable external guarantee" of its sovereignty and territorial integrity. Turchynov's comments and the move to draft a new security strategy were certain to raise hackles in Russia, which annexed the Crimean peninsula in March 2014 after a pro-Western leadership took power in Kiev in the wake of an uprising that ousted a Moscow-backed president. Russian officials have said the radical change of leadership in Kiev raises the strategic threat of US and NATO warships one day being based in the Black Sea waters off Crimea. Moscow has backed separatists fighting Kiev government forces in eastern Ukraine, in a conflict in which more than 6,000 people have been killed. Turchynov said the five-year strategy was based on the reality of military aggression unleashed by Russia. "For the first time in history a permanent member of the U.N. Security Council which possesses the nuclear weapon uses this factor to intimidate the international community and uses its military potential for annexation and seizing the territory of a European country," he said. He said European and Euro-Atlantic integration was now a priority for Ukraine's policies and the country would aim to coordinate its armed forces and intelligence services with those of the Western alliance. Ukraine, at the center of a geo-political tug-of-war between Russia and the West, has grown close to the NATO alliance during the years since independence from the Soviet Union in 1991. The pro-Western leadership has prepared the way for a swerve in strategic direction by scrapping the "non-bloc" status introduced under ousted former president Viktor Yanukovich. NATO has said membership is one day possible for Ukraine, but has declined to arm the Kiev government on the grounds that, as a non-member, it does not qualify for military help under NATO's collective defense rules. The new military doctrine drawn up by the national security council will become policy once it has been endorsed by a decree from President Petro Poroshenko. - Reuters