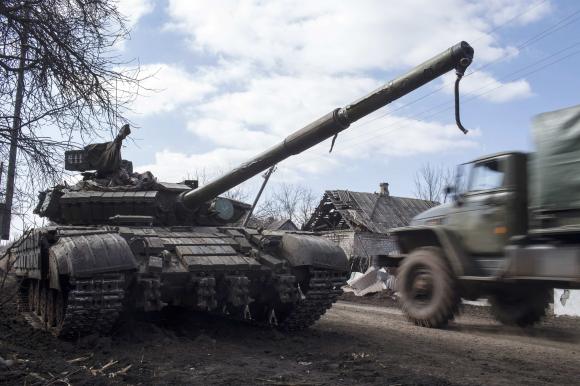 KIEV - Ukraine's military said on Tuesday pro-Russian rebels were amassing heavy weapons in depots around separatist-held Donetsk city despite a ceasefire deal. Attacks have fallen in the past week, but accusations from both sides of violations show the fragility of the peace deal agreed in Minsk last month, which calls for the withdrawal of heavy weapons from the frontline. "(Rebels) are continuing to transport equipment and artillery ammunition intensively via the Debaltseve railway junction and build weapons storages around Donetsk," military spokesman Andriy Lysenko said in a televised briefing. The Organization for Security and Cooperation in Europe, which monitors the pull-back of weapons, has said it cannot fully confirm withdrawal on both sides as it has not been given access to all the locations where some weapons have been moved. Lysenko said Ukrainian positions had come under attack from separatists 31 times on Monday, including five instances of artillery fire, and reported nine servicemen had been wounded in the past 24 hours. "The most troubled areas are Shyrokyne and around Donetsk airport ... yesterday there was fighting almost all day in Shyrokyne," Lysenko said, referring to a village on the outskirts of government-held Mariupol, a strategic port city Kiev fears could be the focus of the next rebel offensive. On the rebel side, officials said Ukrainian forces had violated the ceasefire 17 times in the past 24 hours, but reported no casualties, separatist press service DAN said. - Reuters