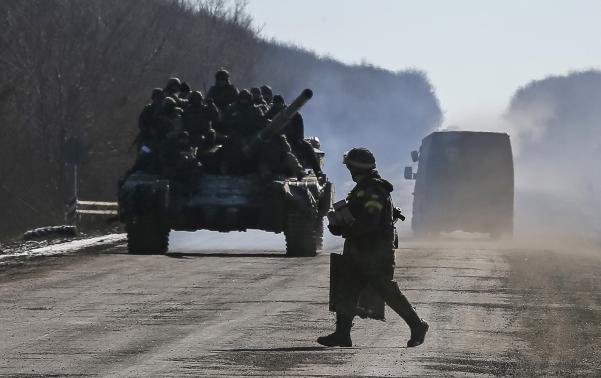 ARTEMIVSK/BULAVYNE, UKRAINE (Reuters) - Government forces were pulling out of an encircled town in eastern Ukraine on Wednesday after a fierce assault by Russian-backed separatists which Kiev and Europe said violated a crumbling ceasefire. President Petro Poroshenko said more than 80 percent of his troops had left the rail hub following a heavy bombardment and street-by-street battles which he said showed "the true face of the bandits and separatists who are supported by Russia". The rebels say the ceasefire, negotiated by Ukraine, Russia,Germany and France at a summit in Belarus last week, does not apply to Debaltseve, which links the two rebel-controlled regions of eastern Ukraine, Donetsk and Luhansk. Poroshenko and the West say the rebel assault is being reinforced by Russian tanks, artillery and soldiers, though Moscow denies sending forces to join the battle for a region that President Vladimir Putin has called "New Russia". "The actions by the Russia-backed separatists in Debaltseve are a clear violation of the ceasefire," European Union foreign policy chief Federica Mogherini said in Brussels, stepping up Western criticism of the rebel offensive on Debaltseve. "The EU stands ready to take appropriate action in case the fighting and other negative developments in violation of the Minsk agreements continue," she said, making an apparent threat of further economic sanctions on Moscow. Canada imposed sanctions on Russia over its conduct in Ukraine on Tuesday, a move Moscow said would fuel further tension in Ukraine and prevent the implementation of the ceasefire. There was little hope when the deal was signed last Thursday in the Belarussian capital Minsk by the rebels, Ukraine, Russia and the OSCE security watchdog that it would hold for long, but its seeming swift collapse has surprised many. NATO Secretary-General Jens Stoltenberg voiced deep concern about the deteriorating situation in and around Debaltseve, saying: "The refusal of the separatists to respect the ceasefire threatens the agreement." Britain Foreign Secretary Philip Hammond said Europe should at least extend its sanctions against Moscow if the ceasefire broke down. A German government spokesman said the Minsk agreement had been damaged though it made sense to try to implement it. PUTIN CALLS FOR SURRENDER Putin showed no sign of backing down over Ukraine on Tuesday evening, when he urged Kiev's pro-Western leaders to let their soldiers surrender to avoid more bloodshed. Hours later, the Ukrainian withdrawal was under way. A Reuters witness saw weary Ukrainian troops, their faces blackened, some in columns, some in cars, arriving in Artemivsk, about 30 km (20 miles) north of Debaltseve. For Poroshenko, the retreat may have saved the lives of thousands of Ukrainian soldiers who were all but trapped in the town against a better-equipped army. But another military defeat, coming as Ukraine approaches the first anniversary of the overthrow of the Moscow-backed president Viktor Yanukovich, may be difficult to stomach for a population weary of a long conflict and could further damage Poroshenko's standing. Pro-Kiev commanders said some forces had pulled out but there were reports of continued fighting in the town. A Reuters correspondent near Debaltseve saw black smoke rising over the town and heard loud blasts hours after the withdrawal began. "The withdrawal of forces from Debaltseve is taking place in a planned and organized way," said Semen Semenchenko, who heads the Donbass paramilitary battalion. "The enemy is trying to cut the roads and prevent the exit of the troops," he said onFacebook. News of the withdrawal immediately affected financial markets, with the cost of insuring exposure to Ukrainian debt and the spreads of the country's dollar bonds over safe haven U.S. treasury bills soaring to record highs. The rouble was largely steady against the dollar, but the official rate of Ukraine's hryvnia currency hit a record low. WITHDRAWAL OF HEAVY WEAPONS Even before the Ukrainian troops were forced to pull back, last week's peace deal had all but collapsed, with both sides failing to withdraw heavy guns as required after the rebels refused to halt their advance. But Interfax news agency later cited the self-proclaimed Donetsk People's Republic as saying separatists had begun pulling back artillery from rebel-held areas where fighting had ceased. Rebels stepped up their offensive on Debaltseve almost immediately after the Minsk deal to end the conflict in eastern Ukraine, which has killed more than 5,000 people, was signed on Thursday. The deal gave both sides until Sunday to lay down their arms, prompting some analysts to suggest the rebels felt they could take the town within that timeframe. Russia has already annexed Ukraine's Crimea Peninsula, and Western countries believe Putin's goal is to establish a "frozen conflict" in eastern Ukraine, gaining permanent leverage over a country of 45 million people seeking integration with Europe.