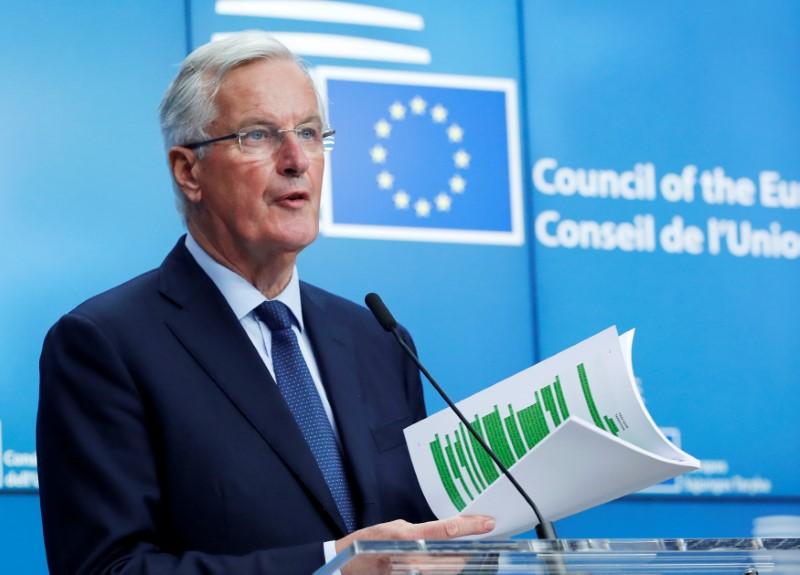 BRUSSELS (Reuters) - Britain’s proposals on its future relationship with the European Union contain constructive elements, but many questions remain, EU chief Brexit negotiator Michel Barnier said . Barnier, who met new Brexit secretary Dominic Raab on Thursday, also reminded Britain there could be no progress on future relations until all elements of its exit were tied up - notably ensuring no hard border between Ireland and Northern Ireland. “As I told the ministers, there are several elements in this white paper that open the way to a constructive discussion regarding the political declaration on our future relationship”, Barnier told a news conference in Brussels following a meeting of EU ministers. Barnier said Britain shared the EU’s desire for an ambitious trading relationship, a level playing field and a security partnership. However, he added that he had put many questions to Britain, asking whether the proposals were workable and if they would create more red tape. “I would simply say that Brexit cannot be and will not be a justification for creating more bureaucracy,” he said. Barnier noted that there were only 13 weeks until EU leaders meet for a summit, by when the European Union and Britain should have finalised a withdrawal agreement. Barnier said that 80 percent of that agreement was already in place, but that there was still no agreement on how to avoid a hard Irish border after Britain leaves the bloc. “This requires a legally operative backstop, an all weather insurance policy, to address the issues of Ireland and Northern Ireland. All 27 member states insist on this,” he said. Prime Minister Theresa May said in a speech she accepted that a hard Irish border was “almost inconceivable”, but dismissed the EU’s current plan as “unworkable”. Barnier said he had invited British negotiators to work on the backstop issue next week. May also called on Brussels to respond quickly to her white paper plan to avoid a damaging no-deal Brexit. EU leaders have avoided going public with criticism, aware of the fragility of May’s government, but many have major reservations, notably about how Britain’s plans could disrupt Europe’s single market. The EU’s internal market assures the free movement of goods, services, capital and persons. May’s white paper indicates Britain is seeking single market privileges for industrial and agricultural goods alone. “When you make a proposal limited to agricultural products and goods, you have to ask what about services, what about capital, what about the free movement of people. Those questions will have to be answered in the coming days and weeks,” said German Europe Minister Michael Roth.