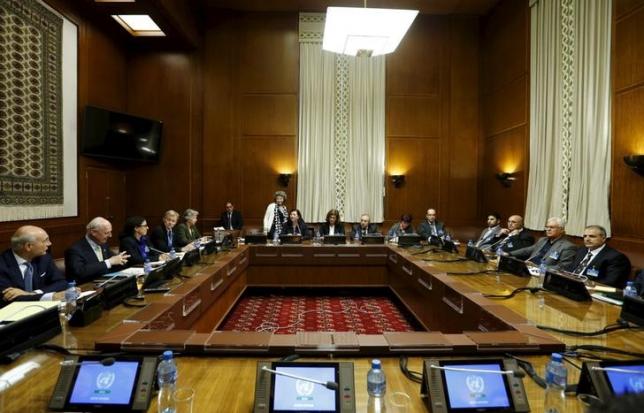 GENEVA/BEIRUT/ROME – The United Nations announced the formal start of peace talks for Syria on Monday and urged world powers to push for a ceasefire even as government forces, backed by Russian air strikes, launched their biggest offensive north of Aleppo in a year.

Rebels said the offensive was being conducted with massive Russian air support, despite a promise of goodwill steps by the Syrian government to spur peace negotiations.

The opposition has said that without a halt to bombing, the lifting of sieges on towns and freeing of prisoners, it will not participate in talks in Geneva called by the United Nations.

"We are here for a few days. Just to be clear, only a few days. If there (is) no progress on the ground, we are leaving ... We are not here for negotiations, we are here to test the regime's intentions,” Monzer Makhous, an official from the Syrian opposition's High Negotiations Committee, told Reuters Television on arrival in Geneva.

Still, opposition delegates met in Geneva for two hours with U.N. envoy Staffan de Mistura, who said this session marked the official beginning of peace talks. The Syrian people deserved to see improvements on the ground and the opposition had a "strong point" in demanding goodwill steps, he said.

World powers, he said, should immediately begin talks on how to enforce a ceasefire: "There was a message ... that when the Geneva talks actually start, in parallel there should be the beginning of a serious discussion about ceasefires."

The Geneva peace talks mark the first attempt in two years to hold negotiations to end a war that has drawn in regional and international powers, killed at least 250,000 people and forced 10 million from their homes.

A senior U.S. official returned from a fact-finding visit to northern Syrian territory held by Kurdish fighters, who have advanced against Islamic State militants with the help of US air support. –Reuters