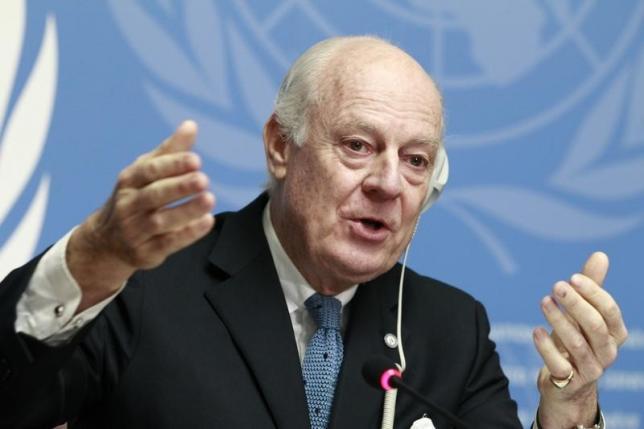 GENEVA - The United Nations said on Tuesday that its Syria envoy Staffan de Mistura planned to consult Syrian factions and interested countries on a new round of peace talks, confirming a Reuters report. "Starting in May ... de Mistura will proceed with a series of in-depth, separate consultations with the Syrian stakeholders and regional/international actors to take stock of their views as of today," UN spokesman Stephane Dujarric said. A UN spokesman in Geneva, Ahmad Fawzi, said de Mistura was "heavily engaged" in discussions on the process, which would be based on the Geneva communiqué, the June 2012 document that set out a path to peace and political transition but left unresolved the future role of Syrian President Bashar al-Assad. UN-led peace talks collapsed a year ago, but Reuters reported on Monday that de Mistura was proposing to hold fresh consultations, having been instructed to revive the political track by UN Secretary-General Ban Ki-moon. No invitations to the talks, which will be held in Geneva, have yet been sent out, Fawzi said. A UN source in Geneva said Iran would be among those invited, but a senior Western diplomat in New York said on condition of anonymity the question of Tehran's participation remained unresolved, despite the UN's clear desire to include the Iranians. Western diplomats in New York said it was hard to be optimistic about the renewed push for Syria peace talks. Iran's proposed involvement has been contentious in previous rounds of Syria talks, although many countries see it as an indispensable part of any political deal, since Iran is a major ally of Assad. In January 2014 Ban Ki-moon invited Iran to attend Syria peace negotiations in Montreux, Switzerland, and then withdrew the invitation, citing Tehran's lack of support for the Geneva communiqué. Asked about Iran's possible participation, Dujarric said: "It is important that all those who have an influence on the current conflict be included in discussions." In 2012, the United States objected to Iran's participation in the ministerial conference that produced the Geneva communiqué. Iran never signed the document and has long actively supported Assad's campaign against rebel forces in Syria. The United States and Iran have narrowed their differences with a draft agreement on Iran's nuclear programme this month, which some diplomats think could ease tensions and help with any future round of Syria talks. - Reuters