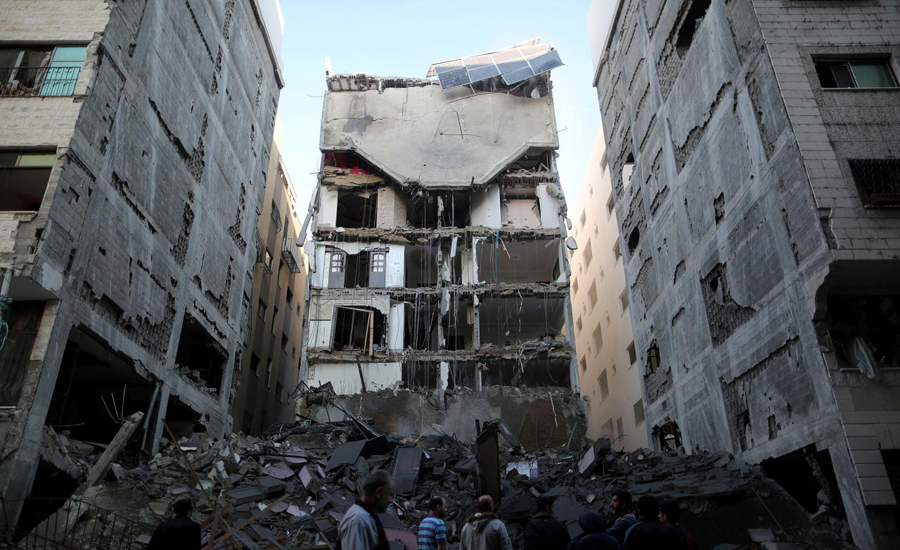 UNITED NATIONS (Web Desk) – The UN Security Council that met behind closed doors to discuss the escalation of violence in the Gaza Strip, said media reports. Diplomats said that there was no agreement on how to address the crisis. Fourteen Palestinians have been martyred and over 30 injured in Gaza by Israel despite unilateral ceasefire from Hamas. Kuwait and Bolivia asked the United Nations Security Council to meet behind closed-doors on Tuesday over the latest violence in Gaza, they added. Palestinian militant groups in Gaza said they would halt cross-border attacks immediately if Israel did the same after the most serious exchanges of aerial fire since a seven-week war in 2014. More than 460 rockets were fired into Israel by militants since Monday night, while Israeli aircraft have hit 160 militant targets in response. Addressing reporters after the 50-minute meeting, Palestinian Ambassador Riyad Mansour said the council was "paralyzed" and had "failed to shoulder its responsibility" to take action to end the violence. "There is one country that is not allowing discussion at the council," Mansour told reporters, in a reference to the United States, which has taken a pro-Israeli stance under President Donald Trump. There was no statement from the council on the crisis. Such statements are agreed by consensus by all 15 council members. Kuwait's Ambassador Mansour al-Otaibi said the majority of council members were of the view that the top UN body "should do something" and some suggested a visit to the region, but no decision was taken. Palestinian militant groups including Hamas, which rules Gaza, issued a joint statement earlier announcing an Egyptian-brokered ceasefire with Israel. The latest round of violence began on Sunday with a botched Israeli special forces operation inside the Gaza Strip that turned deadly and prompted Hamas to vow revenge. Palestinian militants responded with rocket and mortar fire. An anti-tank missile hit a bus that Hamas says was being used by Israeli soldiers. A soldier was severely wounded in the attack. Israel and Palestinian militants in Gaza have fought three wars since 2008, and protests and clashes along the Gaza border since March 30 have repeatedly raised fears of a fourth.