UN tries to breathe life into Syria talks, but fighting rages on 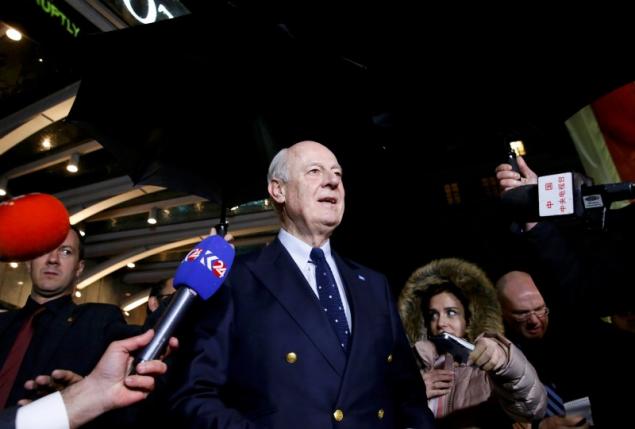 UN tries to breathe life into Syria talks, but fighting rages on

GENEVA – The United Nations struggled to save Syrian peace talks as Damascus and its Russian allies seized territory in fierce fighting and rifts widened among embattled rebel factions.

The Syrian army said on Wednesday its forces had broken through rebel defenses to reach two Shi'ite villages in Aleppo province which had been besieged for three years. Rebels said the breakthrough came after hundreds of bombing raids by Russian warplanes.

Aleppo factions, reeling from an "unprecedented" onslaught, issued an ultimatum to the opposition delegation late on Tuesday at the so far still-born Geneva talks late on Tuesday, a source close to the talks said.

They threatened to bring down the peace negotiations within three days unless the offensive by government and Russian forces ended.

U.N. envoy Staffan de Mistura announced the formal start two days ago of the Geneva negotiations, the first attempt in two years to negotiate an end to a war that has killed 250,000 people, driven a huge wave of refugees and empowered Islamic State.

But talks have not even begun, and pessimism over their chances has grown.

"It seems the first phase of preparations (for talks) will take a much longer time than expected," government delegation chief Bashar al-Ja'afari told Reuters in an interview in Geneva on Wednesday.

"The official discussions did not take off yet unfortunately. We are still discussing how to proceed."

Ja'afari said the government was still unclear on who it would be negotiating with from the fragmented opposition side.

"I couldn't tell you much about what's going on because we are waiting for Godot, and Godot hasn't come yet," he said, referring to Samuel Beckett's never-resolved play "Waiting for Godot".

De Mistura said on Tuesday the process could collapse but it was essential to get it going.

"If there is a failure this time after we tried twice at conferences in Geneva, for Syria there will be no more hope. We must absolutely try to ensure that there is no failure," he told Swiss television RTS.

The opposition's chief coordinator Riad Hijab, who diplomats say is a unifying figure for the disparate rebel side, arrived in Geneva and was joined by de Mistura for talks at a hotel used by the opposition.

NO END TO RUSSIAN STRIKES

The Levant Front rebel group said the breaking of the sieges of the Aleppo villages of Nubul and Zahraa came only after "more than 500 raids by Russian airplanes".

One commander said opposition-held areas of the divided city were at risk of being encircled entirely by the government and allied militia, and appealed to foreign states that back the rebels to send more weapons.

"How can you accept to enter negotiations when you have unprecedented military pressure? The Russians and regime want to push the opposition out of Geneva so the opposition bears the responsibility for the failure," said a senior Western diplomat.

Russian Foreign Minister Sergei Lavrov said his country had no intention of ending its campaign.

"Russian strikes will not cease until we really defeat terrorist organizations like (The al Qaeda-linked) Jabhat al-Nusra. And I don't see why these air strikes should be stopped," he said at a news conference in Oman's capital Muscat.

Diplomats and opposition members said they were taken by surprise when de Mistura called for immediate efforts to begin ceasefire negotiations despite there being no official talks or goodwill measures from the Syrian government.

The opposition has said it will not negotiate unless the government stops bombarding civilian areas, lifts blockades on besieged towns and releases detainees.

The Syrian Observatory for Human Rights, which monitors the violence in the country, said Russian and Syrian warplanes launched dozens of strikes on the rebel towns of Hayan and Hreitan in northern Aleppo on Wednesday.

A U.S. official in Geneva called for an end to "the daily bombing of civilians by Russian and regime aircraft".

"We’re appalled that the regime seems to view humanitarian access as a topic for debate at the talks in Geneva," the official said, stressing that UN Security Council Resolution 2254 already called for an immediate end to attacks on civilians.

When asked about opposition demands for the government to lift sieges and allow humanitarian convoys into cities, including the rebel-held town of Mouadamiya, Ja'afari said the government had regularly sent convoys to it and other cities.

On Sunday, the United Nations said Mouadamiya, a town of 45,000 on the southwest edge of Damascus, faced a new siege by government forces.

"We can't cut and paste with regard to the interest of the people," Ja'afari said. "Everything in Syria is important, everything is a priority for us.

"The issue of selecting Mouadamiya or another area or town is a public relations campaign launched by the so-called opposition."

Senior Syrian opposition negotiator Mohamed Alloush, representing the major rebel group Jaish al-Islam (Islam Army), said it would be insufficient for the government to allow a convoy into the town.

"It’s a step to silence the Syrian people," he told Reuters. "It’s a good step but it’s not enough and the problem is not in Mouadamiya. The problem is in 22 besieged cities."

UN Secretary General Ban Ki-moon called for "a strong show of solidarity" at a conference in London on Thursday on humanitarian aid for Syria.

Lebanon said it would ask international donors at the meeting for $12 billion over the next five years to cope with more than a million Syrian refugees. –Reuters