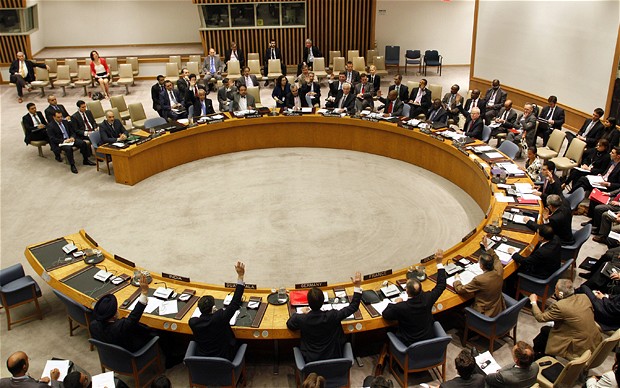 UNITED NATIONS - The United Nations Security Council is likely to vote on Friday on a US proposal to ask UN chief Ban Ki-moon and the global chemical weapons watchdog to assemble a team of investigators to lay blame for toxic gas attacks in Syria, diplomats said. Attributing responsibility for chemical weapons attacks would pave the way for action by the 15-member Security Council. The body has already threatened consequences for such attacks, which could include sanctions. Russia - which has veto power on the council - is a Syrian ally and has protected President Bashar al-Assad's government from any UN action during the four-year civil war. The United States began discussing the draft resolution with Russia several months ago. "The work is almost done. We hope to make it to Friday," said Alexey Zaytsev, spokesman for the Russian UN mission, referring to the possible vote. Several diplomats, speaking on condition of anonymity, said that if no objections to the draft were raised by any council members by Thursday morning then a vote would likely be scheduled for Friday. The draft text, seen by Reuters, would ask Ban and the Organisation for the Prohibition of Chemical Weapons (OPCW) "to submit to the Security Council, for its authorization, within 20 days of the adoption of this resolution, recommendations ... regarding the establishment and operation of an OPCW-United Nations Joint Investigative Mechanism." That team would "identify to the greatest extent feasible individuals, entities, groups, or governments who were perpetrators, organizers, sponsors or otherwise involved in the use of chemicals as weapons, including chlorine or any other toxic chemical, in the Syrian Arab Republic." The council would respond to the recommendations by Ban and the OPCW within five days, according to the draft resolution, and authorise the investigative team for one year. Once a joint team began work, Ban would be required to report to the Security Council on its progress once a month, while the team would be required to complete its first report within 90 days. Syria agreed to destroy its chemical weapons in 2013, but the OPCW has since found chlorine has been "systematically and repeatedly" used as a weapon. The OPCW is not mandated to lay blame. The new joint team of investigators would look at cases where the OPCW has already determined that chemical weapons were likely used. Government and opposition forces have denied using chlorine. Chlorine is not prohibited, but its use as a weapon is prohibited under the 1997 Chemical Weapons Convention, which Syria joined in 2013. If inhaled, chlorine gas turns to hydrochloric acid in the lungs and can kill by burning lungs and drowning victims in the resulting body fluids. A Syrian government crackdown on a pro-democracy movement in 2011 led to an armed uprising. Radical Islamic State militants have since seized on the chaos to declare a caliphate in territory they have seized in Syria and neighbouring Iraq. The United Nations has said that some 250,000 people have been killed and an estimated 7.6 million are internally displaced. Another 4 million people have fled Syria. -Reuters