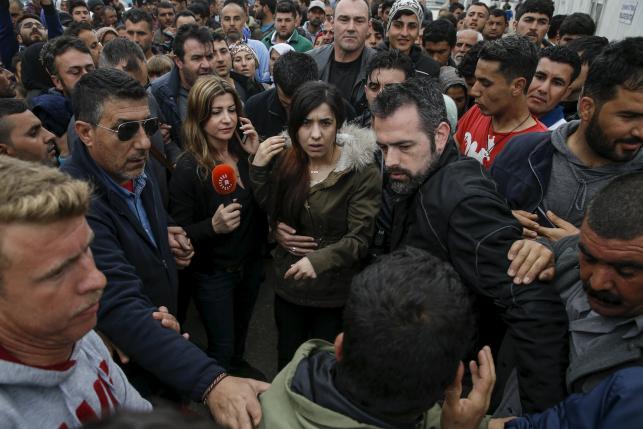 LESBOS - Less than 24 hours before Greece is due to begin returning migrants to Turkey, little sign of preparation is evident on Lesbos, the island through which hundreds of thousands of people have poured into Europe since last year. A few signs Turkey was getting ready for the migrants could be seen on Saturday. Two room-size tents were set up on the pier of the cramped port at Dikili, where migrants being returned from Lesbos were to be taken. Two portable toilets were installed nearby. The return of the migrants is a key part of an agreement between the European Union and Turkey aimed at ending the uncontrollable influx into Europe of migrants and refugees fleeing poverty and war in the Middle East, Asia and Africa. Under the agreement, those who cross into Greece illegally from Turkey from March 20 will be sent back to Turkey once their asylum applications have been processed. Turkey's interior minister, Efkan Ala, was quoted by the pro-government newspaper Aksam as saying 500 people were expected in Turkey from Greece on Monday. Afghans, Iraqis and Pakistanis would be deported to their countries, he said. More than 6,000 migrants and refugees have been registered on Greek islands since March 20. While returns are due to begin on Monday, where they will start from and how many will be returned remains unclear. "Planning is in progress," said George Kyritsis, a Greek government spokesman for the migration crisis. The Athens News Agency reported over the weekend that the returns would begin on Monday morning on two Turkish passenger ships chartered by Frontex, the EU border agency. The ships will sail from Lesbsos across to the Turkish coastal town of Dikili. -Reuters