Under Matric engineer gets back his ‘homemade’ airplane

Under Matric engineer gets back his ‘homemade’ airplane

ISLAMABAD (92 News) – The resident of Arifwala from Pakpattan district ‘under Matric engineer’ Muhammad Fayyaz – who manufactured homemade airplane – received his plane back from the police authorities on Thursday. The under Matric engineer, a popcorn seller and a security guard by profession, with his savings and a bank loan of Rs50,000 made a small airplane. The police arrested him and confiscated his plane during the trial run at an open field on March 31. The man was later released by the local court after Rs3,000 charge. 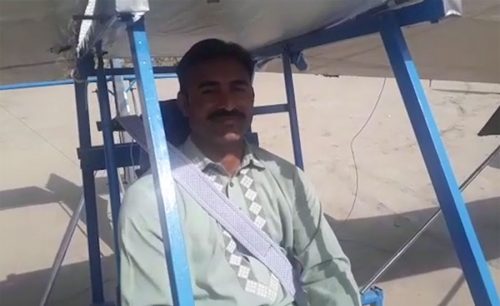 The plane was returned to him on the direction of DPO Pakpattan Maria Mahmood. Fayyaz expressed his pleasure on getting his plane back. It was reported that a Civil Aviation Authorities (CAA) delegation will inspect his plane tomorrow.

Youth who made and flew a airplane remanded in police custody

Earlier, a local court remanded a youth, who made and flew a airplane, remanded in the custody of the police for seven day on Monday. According to the FIR, the police got information that a man had made a plane and flying it in Chak 50/SP. It was also informed the man is showing stunts during the flight. He introduced himself as Fayyaz, a resident of 32/SP. When the police reached there, the man was landing his plane on a carpeted road. The police arrested him with the plane. He was booked under sections 285, 286 and 287 of the Pakistan Penal Code. Fayyaz had sold his four kanal of land to make the plane. It is pity that a talented and uneducated youth is being insulted instead of getting applauds on inventing a plane that can be used for irrigation purposes at an economical price.