Under the weather Djokovic staves off Cilic challenge 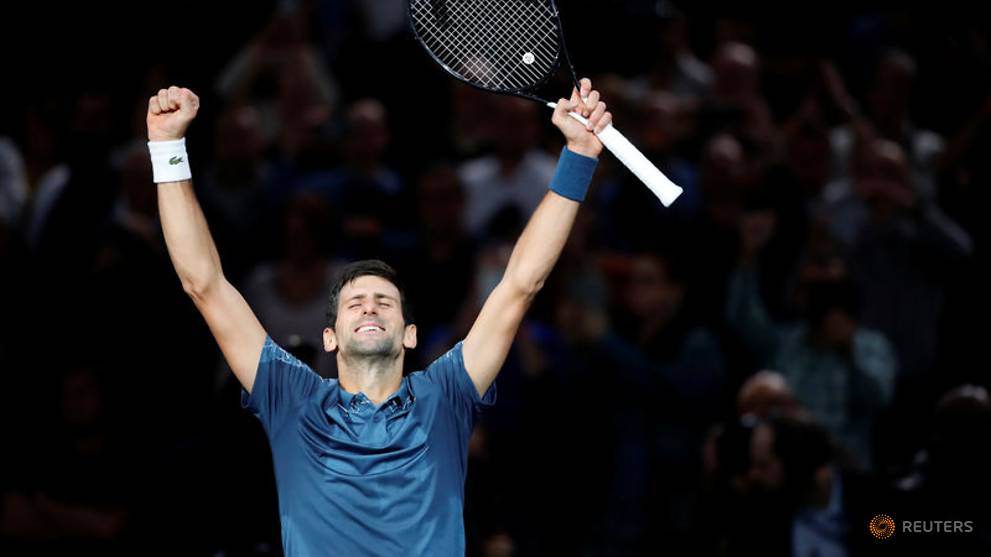 Under the weather Djokovic staves off Cilic challenge

PARIS (Reuters) - Novak Djokovic overcame nagging flu and a formidable examination from Marin Cilic, having to come from a set down to forge into the Paris Masters semi-finals with racket-smashing intensity and extend his winning streak to 21 matches. Djokovic, who will return to world number one next week, faces Roger Federer in Saturday’s last four in Bercy after the great Swiss defeated Kei Nishikori comfortably 6-4 6-4 to move a step nearer to winning his 100th career title. Djokovic had his personal best winning sequence of 30 consecutive sets ended as Cilic played almost flawlessly aggressive tennis to draw first blood in a magnificent duel. Yet it only prompted Djokovic to increase his focus and produce some supreme play to turn the tide and prevail 4-6 6-2 6-3. It was all the more remarkable as the Serb revealed afterwards that he was still feeling under the weather. “I’m still struggling. It’s kind of a flu. But it’s not easy to perform every single day, the energy levels are not as high,” he told reporters. “I try to manage the situation but I’ve had this particular case before so I hope I can progress day by day.”

The Serb was in such an intense mood that even when he was fighting back in the second set, leading 5-2, he screamed at his team, demanding to know why he had not received vitamin tablets. After being broken to go 2-1 down in the final set, Djokovic smashed his racket, accepted the code violation and steamed with anger in his seat before immediately breaking back. When in more peril at break point down at 3-3, he delivered an amazing game-saving backhand at full stretch, which perhaps helped break Cilic’s spirit as he squandered the next game before succumbing in two hours and 11 minutes. Federer, in stark contrast, was hardly stretched in despatching Nishikori, beating the Japanese for a sixth straight time while not dropping serve. He did, though, offer glimpses of his very best, which will be needed to beat Djokovic in their 47th meeting on Saturday. “I know Novak’s on a hot streak so I think it’s going to be tough. But nevertheless I think I’ve got nothing to lose,” Federer said. “I think I’m ready to do something tomorrow.” Earlier, Russian Karen Khachanov pulled off one of the surprises of the tournament when he outplayed top young gun Alexander Zverev 6-1 6-2 to reach the other semi against Dominic Thiem, who beat defending champion Jack Sock 4-6 6-4 6-4. Khachanov, at 22 another of the sport’s brightest prospects, took ruthless advantage of the 21-year-old German’s physical struggles as Zverev, battling with shoulder trouble, needed a medical time out in the first set at 4-1 down. The Muscovite deserved all the credit for the quality of his power game, however, as he broke the world number five’s serve six times in 70 minutes. The day’s action in Paris ensured that Cilic and Thiem are now guaranteed the last two of eight places on offer for the ATP Finals in London this month. Ninth-placed Nishikori and 10th-placed John Isner have missed the cut but both could yet find a place if Rafa Nadal and Juan Martin del Potro, currently both struggling with injury, pull out.