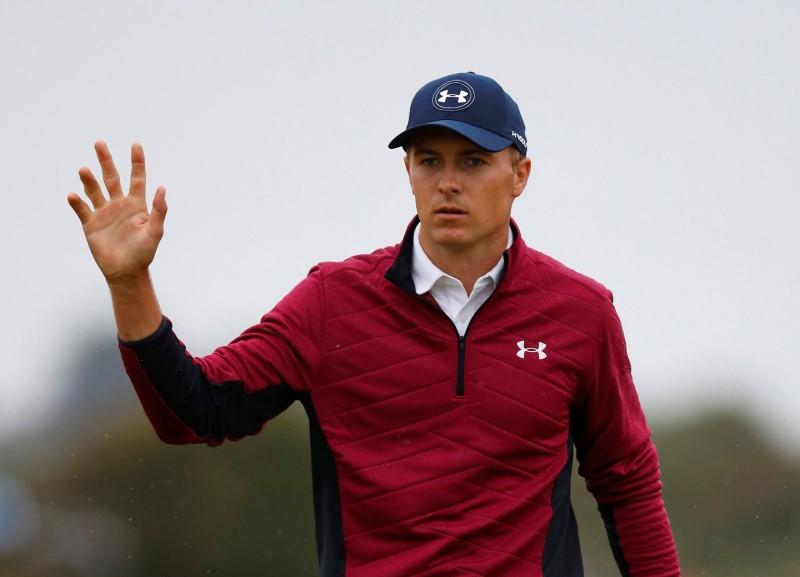 SOUTHPORT, England (Reuters) - It will clearly take more than blustering wind and hammering rain to stop Jordan Spieth at Royal Birkdale after he opened up a two-shot lead, posting a one under-par 69, in the second round of the British Open on Friday.

Spieth, who encountered the worst of the weather in both rounds, stands at six under-par 134 with compatriot Matt Kuchar, two strokes behind after his very solid 71.

As well as Kuchar, the Texan is also being chased by England's Ian Poulter and another American, U.S. Open champion Brooks Koepka, both three shots back.

Rory McIlroy refused to get bogged down by his first-round nightmare as he put himself in the frame with a fine round of 68 earlier in the day, moving to five shots off the lead.

But brimming with confidence and clearly able to adjust to the conditions, the 23-year-old Spieth looks well capable of winning a third major, to add to his 2015 Masters and U.S. Open triumphs.

His round featured four bogeys, three birdies and an eagle -- the latter coming on the 15th hole. Considering that the winds were upwards of 30 miles per hour, the numbers didn't reflect the skill he showed.

He wasn't great off the tee, indeed he was 126th in the field for driving accuracy.

Spieth acknowledged that he needs better driving but is clearly looking forward to the final two rounds, even if he is already feeling some butterflies.

"Anytime you're in the last group on a weekend in the major, and... I think probably a dozen times I've had at least a share of the lead in a major championship, you get nervous," said Spieth.

"And I'll be feeling it this weekend a bit. But I enjoy it because -- as long as I approach it positively and recognise that this is what you want to feel because you're in a position you want to be in, then the easier it is to hit solid shots and to create solid rounds."

Kuchar's one-over-par round of 71, in the gusty winds, was only slightly soured by a bogey on the 18th.

The 39-year-old, who has yet to win a major, found a bunker off the tee on the 18th, had to lay up and then left his third shot short but was able to make a five on the par-four final hole.

Poulter, seeking to become the first Englishman to win the British Open since Nick Faldo at Muirfield in 1992, also handled the tough conditions with aplomb as he shot 70.

Koepke navigated through the challenging weather with 16 pars and two bogeys.

McIlroy made three birdies on his opening six holes on Friday.

The Northern Irishman had bogeyed five of those holes on Thursday before recovering to end the opening day on one over-par, and he was able to carry his good work into his second round.

But bogeys on the 13th and 15th holes undid some of his progress up the leaderboard, although a birdie on the 17th allowed him to end the day on a high note.

Scotland's Richie Ramsay followed up his first round 68 with a solid even-par 70 on Friday to leave him four strokes off the lead.

The best second round score came from American Zach Johnson, the 2015 winner, who shot 66.

Five-times major tournament winner Phil Mickelson missed the cut after a triple bogey on the par-four third made life difficult for the left-hander who shot 77.