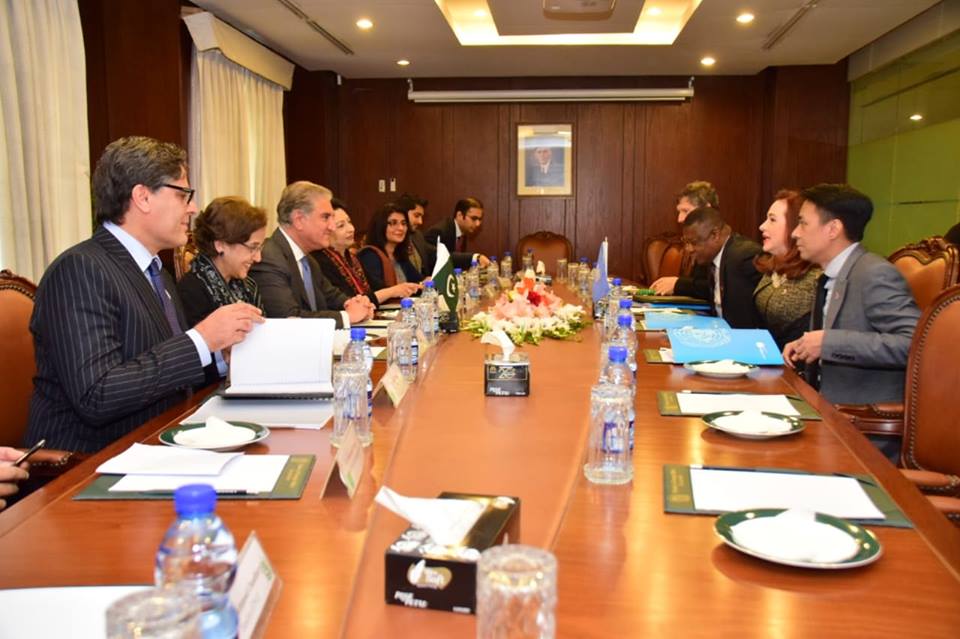 ISLAMABAD (92 News) – Pakistan has demanded that implementation of the UN resolutions on the Kashmir issue should be ensured. Addressing a press conference with the UN General Assembly (UNGA) President Maria Fernanda Espinosa on Friday, Foreign Minister Shah Mahmood Qureshi said that Indian violations on the Line of Control (LoC) are continuing. UNGA President Maria Fernanda Espinosa said that Pakistan’s role in the Afghan peace process is very important. “We will jointly face the challenges of environmental changes,” she said. The UNGA president also met with Foreign Minister Shah Mehmood Qureshi at Foreign Office. During the meeting, the foreign minister said that a vibrant and strengthened the UN can help to resolve issues through collected efforts. Both the sides discussed regional and international issues including Kashmir in the meeting. Qureshi expressed grave concern over the human rights violations in occupied Kashmir by Indian security forces. He stressed to implement the UN Security Council’s Resolutions for the early settlement of Kashmir dispute. During the visit, Ms Espinosa will also call on the President Dr. Arif Alvi and  Prime Minister Imran Khan. This is her first visit to any Asian country as the president of UNGA. Espinosa will call on President Dr Arif Alvi and Prime Minister Imran Khan. Apart from official engagements, the UNGA president will also meet members of Women Parliamentary Caucus, Chairperson Benazir Income Support Programme (BISP) and visit Pakistan’s Peacekeeping Training Center. Espinosa will also address members of academia, think tanks and students.

The President of the UN General Assembly, Ms. Maria Fernanda Espionosa, will visit Islamabad from 18-22 January 2019 on the invitation of the Govt of Pakistan. A wide ranging program awaits her and her entourage. pic.twitter.com/jMTIzIOB6H

María Fernanda Espinosa Garcés (born September 7, 1964) is an Ecuadorian politician and diplomat. She is the current President of the United Nations General Assembly for the 73rd session, office which started in September 2018. She was Minister of National Defence of Ecuador from 28 November 2012 to 23 September 2014. Currently, she is serving as Minister of Foreign Affairs under President Lenín Moreno. She also held several other Ministerial posts before. She served as the Permanent Representative of Ecuador to the United Nations in Geneva from October 2014 to May 2017, and held the same position from 2008 to 2009. Besides her political career she is also a poet and essayist.