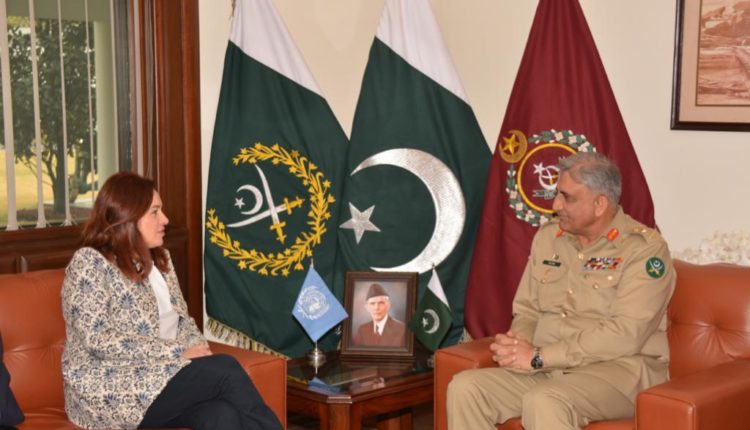 RAWALPINDI (92 News) – United Nation General Assembly (UNGA) President Maria Fernanda Espinosa Garces called on Chief of the Army Staff General Qamar Javed Bajwa in Islamabad at the general headquarters on Tuesday. According to Inter-Services Public Relations (ISPR), they exchanged the views of mutual interests including regional security situation during the meeting. In the meeting, the UNGA president lauded the contributions made by the Pakistan Army for maintaining peace, stability and rehabilitation in conflict zones. “UN values Pakistan’s role in the war against terror and efforts to resolve the regional issues,” Maria Fernanda said. On the occasion, the army chief thanked the visiting dignitary for her acknowledgment and contributions as part of the UN.

A day earlier, the UNGA president paid rich tribute to sacrifices rendered by Pakistani peacekeepers for global peace and security. Maria Fernanda is on her official visit to Pakistan on five-day. During her visit to Center for International peace and stability (CIPS) on Monday, she has acknowledged Pakistan’s meritorious contributions to the UN peacekeeping missions. While interacting with faculty members and students of National University of Science and Technology (NUST) during her visit to the university, she termed it one of the largest countries to have contributed to bringing peace in areas marred by insecurity and unrest. “Pakistani troops have saved many lives under the UN umbrella,” she said. According to Inter-Services Public Relations (ISPR), the delegation paid tribute to 156 Pakistani peacekeepers who sacrificed their lives in the noble cause of humanity and restoring peace and stability in different regions. On her arrival, she was welcomed by National University of Sciences and Technology (NUST) Rector Lieutenant General (retd) Naveed Zaman. Pakistan’s Ambassador and Permanent representative to the UN, Dr Maleeha Lodhi was also present during the visit. Earlier, Pakistan has demanded that implementation of the UN resolutions on the Kashmir issue should be ensured. Addressing a press conference with the UNGA President Maria Fernanda Espinosa, Foreign Minister Shah Mahmood Qureshi said that Indian violations on the Line of Control (LoC) are continuing. The UNGA president said that Pakistan’s role in the Afghan peace process is very important. “We will jointly face the challenges of environmental changes,” she said.