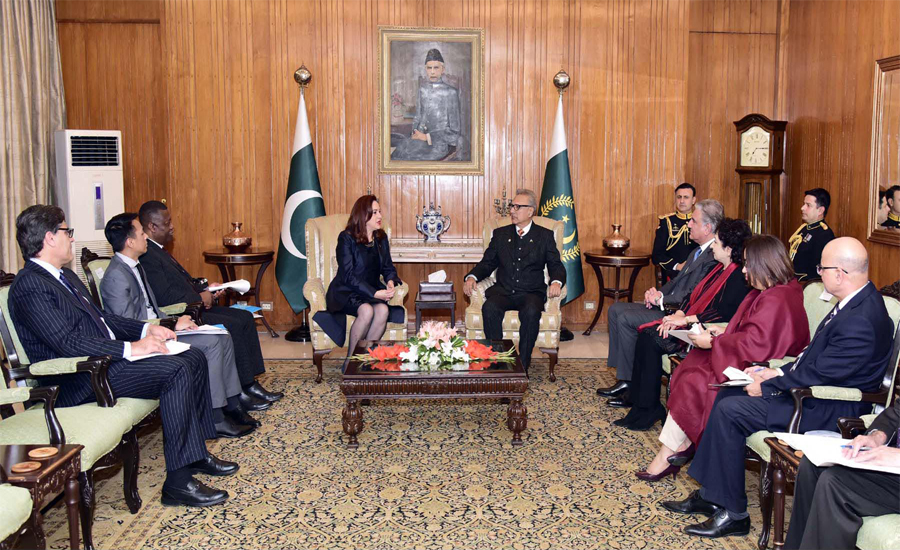 ISLAMABAD (92 News) – UNGA President Maria Fernanda Espinosa called on President Arif Alvi on Friday. Federal Minster for Foreign Affairs Makhdoom Shah Mahmood Qureshi was also present on the occasion. Speaking on the occasion, President Arif Alvi said that Pakistan has always been supporter of the United Nations and its charter and will continue to play its active role in its support. President Dr Arif Alvi drew the attention of the UN General Assembly's president to the atrocities being committed by Indian security forces in Indian Occupied Kashmir. He underlined that national agenda of Pakistan perfectly aligns with the Sustainable Development Goals (SDGs) of the United Nations. He said that Pakistan is proud to have contributed substantially to global peace through our robust participation in UN Peacekeeping Missions. He emphasized: “We will continue to play our role to making this world a better, safer and more prosperous place for all.” Discussing the UN Security Council Reform, President Dr Arif Alvi underscored that it is an important issue for all member states. He stressed that Pakistan wants this reform process to proceed on the basis of consensus which should be reflective of the aspiration of all member states. Speaking on the occasion, UNGA President Maria Fernanda Espinosa said that they were trying to make the UN ‘Parliament of the World’, a body more relevant to the needs of the people around the world. President Dr Arif Alvi also commended the vision of President of UN General Assembly Maria Fernanda Espinosa Garces and hoped that the UN will be further strengthened during her tenure and will make considerable headway in conflict prevention and resolution, and in addressing major outstanding issues on its agenda including Jammu and Kashmir.