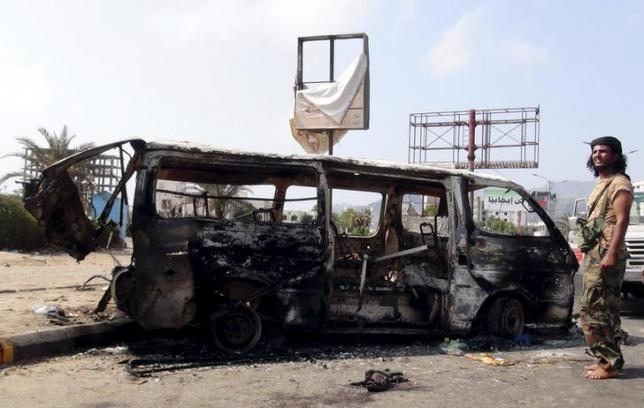 ADEN - Yemen's Houthi fighters and their allies seized a central Aden district on Thursday, striking a heavy blow against the Saudi-led coalition which has waged a week of air strikes to try to stem advances by the Iran-allied Shi'ite group. Hours after the Houthis took over Aden's central Crater neighbourhood, unidentified armed men arrived by sea in an area of the port city which the Iran-allied Shi'ite fighters have yet to reach. A Yemeni official denied that ground troops landed in Aden and a port official said they were armed guards who disembarked from a Chinese warship evacuating people from the city. The Houthis and their supporters swept into the heart of Aden despite an eight-day air campaign led by Riyadh to stem their advances. The southern city has been the last major holdout of fighters loyal to the Saudi-backed President Abd-Rabbu Mansour Hadi, who fled Aden a week ago and has watched from Riyadh as the vestiges of his authority have crumbled. In a symbolic move, the Houthis fought their way into a presidential residence overlooking Crater, residents said. They said a jet bombed the complex shortly after Houthis moved in, and three air strikes shook the city further north. The Houthis, who took over the capital Sanaa six months ago in alliance with supporters of former president Ali Abdullah Saleh, turned on Aden last month and have kept up their advances despite the Saudi-led intervention which aims to return Hadi to power. Crater residents said Houthi fighters and their allies were in control of the neighbourhood by midday on Thursday, deploying tanks and foot patrols through its otherwise empty streets after heavy fighting in the morning. It was the first time fighting on the ground had reached so deeply into central Aden. Crater is home to the local branch of Yemen's central bank and many commercial businesses. "People are afraid and terrified by the bombardment," one resident, Farouq Abdu, told Reuters by telephone from Crater. "No one is on the streets - it's like a curfew". Another resident said Houthi snipers had deployed on a mountain overlooking Crater and were firing on the streets below. Several houses were on fire after being struck by rockets, and messages relayed on loudspeakers urged residents to move out to safer parts of the city, he said. Hadi's rump government has appealed for international ground forces to halt the Houthis. Foreign Minister Reyad Yassin Abdulla said he could not confirm that coalition forces had landed in Aden, but told Reuters: "I hope so. I hope very much." A military spokesman in Riyadh said there had been no ground operation by the coalition in Aden, and Saudi Arabia's ambassador to the United States said the kingdom does not have "formal" troops on the ground there. But he reiterated that a ground operation remained a military option. A diplomat in Riyadh said Aden had come to symbolise Hadi's fading authority, meaning that Saudi Arabia could not afford to allow it to fall completely under Houthi control. But he said Riyadh's air campaign was so far geared more towards a slow war of attrition than an effective defence. "Saleh and the Houthis are keeping the pressure on Aden, which is the weak point in Saudi strategy," he said. "I think the Saudis would put ground forces into Aden to recapture it if it falls. It is a red line for them." AL QAEDA JAILBREAK The war on the Houthis is now the biggest of multiple conflicts being fought out in the Arabian Peninsula's poorest state, also grappling with a southern secessionist movement, tribal unrest and a powerful regional wing of al Qaeda. The fighting has forced Washington to evacuate U.S. personnel from the country, one of the main battlefields in the secret American drone war against al Qaeda. Huge street demonstrations in 2011 linked to wider Arab uprisings forced veteran leader Saleh to step down, but he has re-emerged as an influential force by allying himself with the Houthis, his former enemies. The Houthis are drawn from a Zaidi Shi'ite minority that ruled a thousand-year kingdom in northern Yemen until 1962. Saleh himself is a member of the sect but fought to crush the Houthis as president. In the Arabian Sea port of Mukalla, 500 km (300 miles) east of Aden, suspected al Qaeda fighters stormed the central prison and freed 150 prisoners, some of them al Qaeda detainees, sources in the local police and administration said. They named one of the escapees as Khaled Batarfi, a provincial al Qaeda leader who was arrested four years ago. Soldiers loyal to Hadi clashed with the suspected al Qaeda fighters in Mukalla early on Thursday, residents said. In Dhalea, 100 km (60 miles) north of Aden, where militia fighters from the south have battled Houthis for several days, residents said the militia were in control of the town but Houthis were sniping from rooftops. Residents also reported air strikes overnight on the coastal town of Shaqra, which is under Houthi control and lies on the coast between Aden and Mukalla. China's Xinhua news agency said a Chinese missile frigate evacuated 225 people, all non-Chinese nationals, from Aden on Thursday to Djibouti. - Reuters