Football club United rediscover their swagger but City are stunned 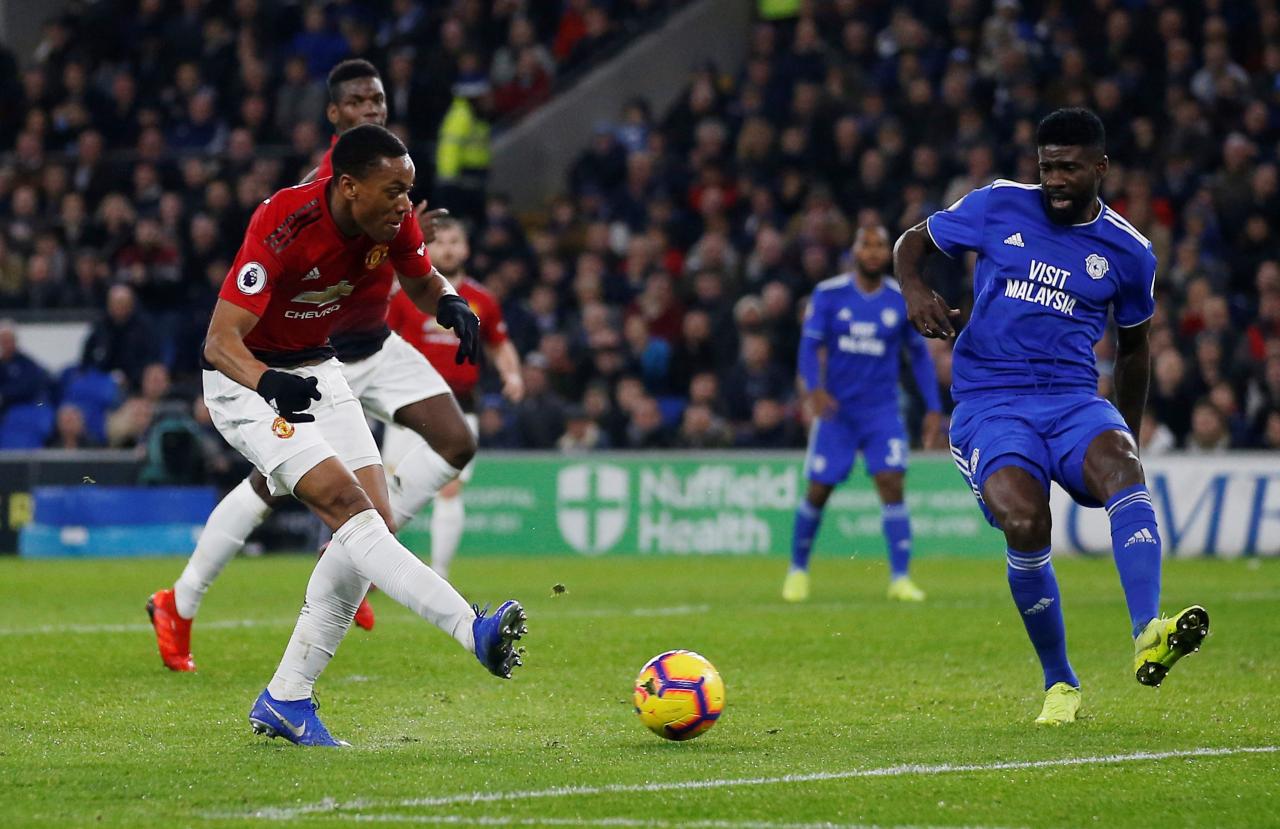 Football club United rediscover their swagger but City are stunned

LONDON (Reuters) - Manchester City stumbled to the most unexpected defeat of the Premier League season before neighbours Manchester United began their brave new world under Ole Gunnar Solskjaer with a glorious reminder of long-forgotten attacking swagger. After City’s sensational 3-2 reverse against Crystal Palace at their Etihad fortress, United seemed liberated and re-energised after Jose Mourinho’s midweek sacking as they romped to a 5-1 win at Cardiff City — the first time they have hit five in the league since the final match of the golden Alex Ferguson era in 2013. A remarkable 30-metre thunderbolt from Andros Townsend adorned Palace’s comeback from a goal down in the rain as Pep Guardiola’s champions City saw their 100 percent league home record this season shattered. So, what recently looked like an imperious title defence now looks problematic as City lie four points behind leaders Liverpool, who had thrown down the gauntlet with a 2-0 win at Wolverhampton Wanderers on Friday. There was more good news for the Reds as fourth-placed Chelsea also squandered their unbeaten home record with a 1-0 defeat by Leicester City. Arsenal kept up their pursuit in fifth, thanks to a double from Pierre-Emerick Aubameyang in a 3-1 home win over Burnley that put the Gabonese striker top of the league’s goalscoring charts. After 18 matches, Liverpool are now the only unbeaten side left in England’s top four divisions on 48 points, with City on 44 and Tottenham Hotspur, who visit Everton on Sunday, third on 39. Chelsea and Arsenal both have 37, while United are on 29. On a remarkable, rain-sodden afternoon at the Etihad, Manchester City, who had lost their season’s unbeaten record at Chelsea two weeks ago, seemed predictably dominant when striding into a first-half lead through Ilkay Gundogan. But Palace responded quickly with a Jeffrey Schlupp strike and three minutes later a wondrous volley from 30 metres from the mercurial England international Townsend, an early contender for goal of the season. Luka Milivojevic put the visitors further clear with a penalty after the break before Palace survived a late onslaught that saw Kevin De Bruyne score five minutes from time. “It’s complicated but we fight until the last second. We are in December and we will try and recover and try and win games again,” shrugged Guardiola, conceding that his side needed to “recover mentally and recover physicality”.

In stark contrast, after a traumatic week which saw the end of Mourinho’s two-and-a-half-year reign, Manchester United seemed mentally and physically re-born, playing with verve, pace and attacking intent that reflected the smile of their still fresh-faced caretaker boss and old club hero, Solskjaer. He was beaming after three minutes when Marcus Rashford’s free kick put United ahead and further goals before halftime from Ander Herrera and Anthony Martial — after a dazzling passing interchange — and a second-half double from Jesse Lingard made it a perfect start for the Norwegian. United, with Paul Pogba back in the fold, poured forward in a free-spirited manner rarely seen under Mourinho as Solskjaer lifted the gloom of United’s worst start in 28 years. “Football is easy if you have good players. This is such a great group of players. The quality is just unbelievable,” the modest Solskjaer said, as both his team and ex-United players, headed by Wayne Rooney, all praised the instant ‘Ole effect’. Chelsea’s loss at Stamford Bridge seemed almost as unlikely as Manchester City’s with Leicester facing the prospect of a third straight defeat but Jamie Vardy’s first-time finish soon after the break brought much-needed relief for the Foxes’ manager Claude Puel. At the Emirates Stadium, the predatory Aubameyang took his tally of league goals to 12 with his double in the win over Burnley, one more than Liverpool’s Mohamed Salah. Fulham earned a goalless draw at Newcastle United but remained bottom of the table on 10 points alongside Huddersfield Town, who were beaten 3-1 by a Southampton side that look rejuvenated under new Austrian manager Ralph Hasenhuettl. Watford moved into seventh place with a 2-0 win at West Ham United, thanks to goals from Troy Deeney and Gerard Deulofeu.