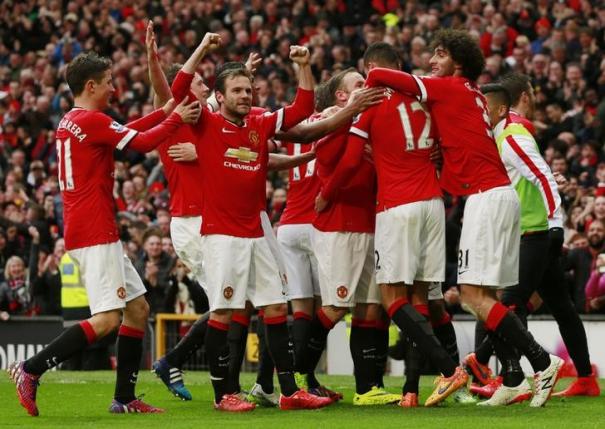 MANCHESTER - Manchester United cemented third spot and moved four points clear of neighbours Manchester City with a crushing 4-2 victory over the Premier League champions at Old Trafford on Sunday. After four consecutive humbling defeats in the derby, United produced a flowing performance, recovering from falling behind to heap more misery on their faltering neighbours. Sergio Aguero put the visitors ahead after eight minutes but Ashley Young grabbed an equaliser six minutes later before an unmarked Marouane Fellaini headed United in front in an explosive first period. Juan Mata and Chris Smalling scored in quick succession in the second period to put United firmly in control before Aguero pulled a consolation goal back for City to notch up 100 goals for the club. Louis van Gaal's side have now won six successive Premier League games and have 65 points from 32 matches, one less than second-placed Arsenal, but four more than City with six matches remaining this season. City's title challenge has fizzled out alarmingly since the turn of the year but they began as if they were out to prove that they still hold sway over their local rivals. Jesus Navas forced an early save from United goalkeeper David De Gea before a crisp passing move enabled Argentine striker Aguero to turn in David Silva's cross. If City's goal was neatly crafted then United's equaliser was anything but as a long ball from De Gea was crossed into the box by Ander Herrera and Young bundled home. United had found their rhythm and Daley Blind and Young combined nicely down the left before Young floated a cross to the back post where the towering Fellaini crept in behind Gael Clichy and headed past Joe Hart. City captain Vincent Kompany was lucky to escape with a yellow card after a tough tackle on Blind and was replaced by Eliaquim Mangala at halftime. But the visitors fell further behind when Spaniard Mata raced clear to slot the ball past Hart. England defender Smalling added a fourth when he capitalised on some slack defending to head home Wayne Rooney's free-kick. - Reuters