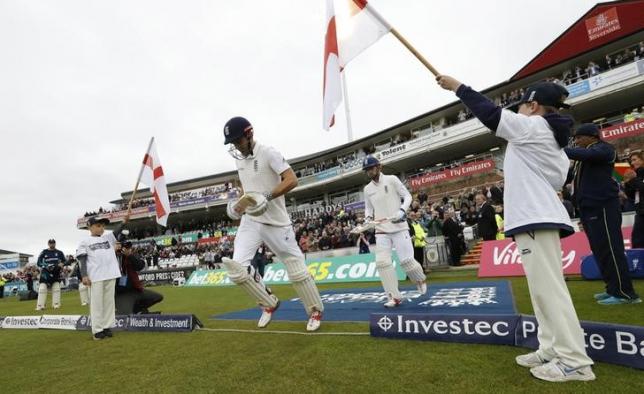 LONDON – An untidy shot prevented captain Alastair Cook from grabbing a place in cricketing history on Friday when he was caught at slip for 15 as England reached 83-2 at lunch on the first day of the second test against Sri Lanka. Cook needed 20 runs to become the youngest player -- and the first Englishman - to reach 10,000 runs in tests at the age of 31 years, five months and two days but the opener jabbed at a wide delivery from Suranga Lakmal outside the off stump and was caught by Dimuth Karunaratne diving low with England at 39-1. Cook would have beaten Indian Sachin Tendulkar's record of 31 years, 10 months and 20 days, which has stood since 2005. Only 11 batsmen have achieved the feat. England, who won the first test at Headingley by an innings, won the toss. Cook's opening partner Alex Hales had made an unbeaten 45 at lunch after losing Nick Compton for nine just before the interval, caught spectacularly on the boundary by Lakmal off the bowling of Nuwan Pradeep at 64-2. It was another rash shot from the England number three, getting a top edge towards long leg, trying to hook outside the off stump. Lakmal hurled himself backwards as he raced towards the boundary and took the catch just before the ropes. Joe Root had scored 12 alongside Hales after 31 overs at the break. –Reuters