Up to 51 dead after bus crash in southern Brazil 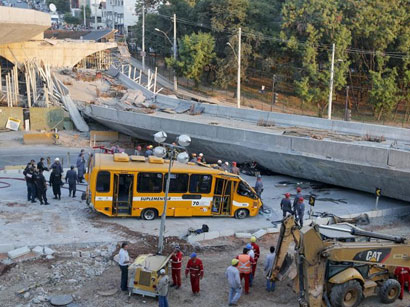 Up to 51 dead after bus crash in southern Brazil

RIO DE JANEIRO - As many as 51 people died on Saturday when a passenger bus drove off a cliff in the southern Brazilian state of Santa Catarina, police said. The bus, en route from the neighboring state of Parana, swerved off a curve and fell dozens of meters before crashing in a wooded area. Rescue crews were still trying to rescue survivors and recover the bodies of the victims late in the day. Initially, police had reported 32 killed, but later said recovery crews believed an additional 19 were dead. Police did not know how many passengers in all were aboard the bus or whether the driver was one of the victims, but said that at least six survivors were being treated for injuries. The bus was about 10 km (6 miles) from its destination in the city of Joinville when it crashed. Highway and weather conditions at the time were good, a police spokesman said. Though no immediate cause for the crash had been determined, police said it appeared the brakes on the bus failed. Brazil has some of Latin America's deadliest roads. Despite nearly a decade of sustained economic growth that only slowed in recent years, the country has done little to improve or expand its creaky infrastructure. The country averages more than 18 highway deaths per 100,000 people per year, compared with only about 10 in high-income countries, according to a report by the Inter-American Development Bank. The tolls in nearby Argentina, Colombia and Chile average only about 13. - Reuters