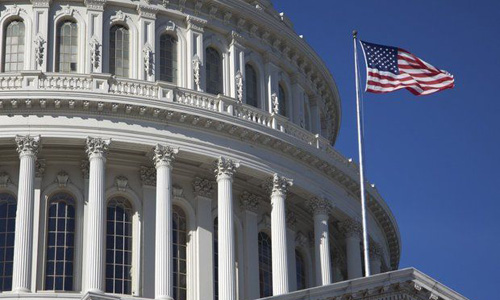 WASHINGTON – Abortion politics in the US Congress, already holding up a human trafficking bill and a key Obama administration nomination, are now also complicating bipartisan talks on a deal that would spare physicians from Medicare pay cuts. Senate Minority Leader Harry Reid and another senior Democrat, Senator Ron Wyden, say they're worried that an emerging House of Representatives deal to rewrite Medicare's flawed doctor-pay formula will include anti-abortion language. One of the country's most divisive issues, abortion has been a flashpoint in Congress for decades. Democrats on Friday expressed concern that Republicans may be mounting a renewed anti-abortion push. Referring to an anti-abortion measure known as the "Hyde amendment," Reid is concerned that "Republicans are trying to slowly but systematically expand the scope of Hyde," Reid's spokesman, Adam Jentleson, said on Friday. The Hyde amendment bans federal funds from being used for abortions except in the case of rape, incest or when the mother's life is in danger. The amendment has been routinely attached to annual US appropriations legislation since the 1970s. But some Democrats say they worry that Republicans are now trying to add it to unrelated bills in an effort to extend its impact. Concern about the Medicare doctor-pay issue comes after a separate bill to increase penalties for human trafficking got mired down in the Senate this week because Democrats objected to anti-abortion language in it. The dispute over the bill has blocked progress on Democratic President Barack Obama's nomination of Loretta Lynch to be US attorney general. Senate Majority Leader Mitch McConnell says he won't call a vote to confirm Lynch until the human trafficking bill is done. The "doc fix" plan under discussion in the House would establish a new formula for paying Medicare doctors that would cost $200 billion over 10 years. The talks involve House Speaker John Boehner, a Republican, and Minority Leader Nancy Pelosi, a Democrat. The emerging House agreement would also include $7.2 billion for community health centers, which provide medical care for low-income Americans. This two-year extension of their funding also would extend abortion restrictions currently in place at the centers, congressional aides said. This concerned Reid as well as Wyden, the top Democrat on the Senate Finance Committee. Wyden called the provision "a complete non-starter that has no place in a bill about access to care for America's seniors and children." A "working framework" of the tentative Medicare pay deal, released on Friday, did not include the anti-abortion language, leaving the details unclear. House leaders hope for a vote on the "doc fix" package next week, so they can send it to the Senate for action by April 1, when the current Medicare payment formula expires. If Congress has not acted by then, hundreds of thousands of doctors who treat Medicare patients face a 21 percent cut in their reimbursements. –Reuters