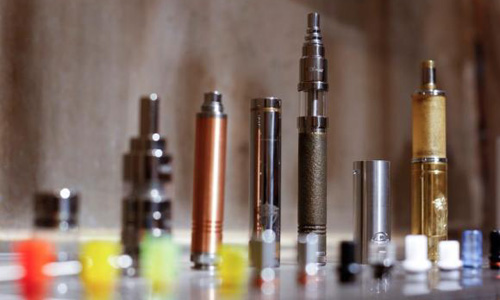 ATLANTA - The US Centers for Disease Control is launching an ad campaign warning consumers against the dual use of e-cigarettes and regular cigarettes. E-cigarettes are battery-powered devices that heat a nicotine-laced liquid to produce an inhalable vapor. Nationally, about three in four adult e-cigarette users also smoke cigarettes, the CDC said. "If you only cut down the number of cigarettes you smoke by adding another tobacco product, like e-cigarettes, you still face serious health risks," the CDC said in a statement. "Smokers must quit smoking completely to fully protect their health - even a few cigarettes a day are dangerous." The ads, which will begin running in print publications and radio on Monday, feature a 35-year-old named Kristy who tried using e-cigarettes to quit smoking, but wound up using both products. She suffered a collapsed lung and was diagnosed with COPD, a chronic lung disease, before quitting altogether. The ads build on the CDC's "Tips From Former Smokers" campaign, which was launched in 2012. Most experts agree that e-cigarettes are likely safer than traditional cigarettes, but early data suggests many e-cigarette users are also continuing to smoke cigarettes. Such data could have implications for the US Food and Drug Administration's proposed regulation of e-cigarettes. Tobacco companies are developing products that they hope to show reduce harm from smoking. In order to receive FDA approval to make such a claim, they must prove the products not only reduce risk to an individual who switches or quits but also to the population as a whole. The FDA has proposed reviewing new products before they are allowed to be sold and prohibiting sales of the devices to minors. It expects to publish its final rule in June. Cigarette smoking kills more than 480,000 Americans each year. For each of those, about 30 more suffer at least one serious smoking-related illness. - REUTERS