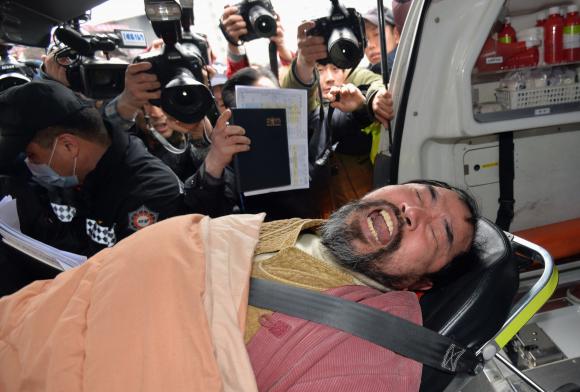 SEOUL - Efforts by South Korean police to charge a nationalist over a knife attack on the US ambassador have renewed debate about the use of a state security act as a political weapon and an attempt to gloss over security shortcomings. Kim Ki-jong, 55, could face charges including attempted murder over the March 5 attack as well as violating the National Security Act, a 67-year-old statute that critics say has long outlived its purpose. Many contend it is used by conservative governments to gag liberal political opponents by painting them as supporters of North Korea, with whom South Korea technically remains at war. Kim, who has a long history of violent protest, made seven trips to North Korea between 1999 and 2007. Police seized literature at his home they described as "beneficial to the enemy" as part of their investigations. "During interrogation, he said there are no leaders in the South comparable to Kim Il Sung," Kim Cheol-joon, a police official leading the investigation, told a briefing on Friday, referring to the North Korean state founder. Critics say trying to charge Kim under the security law politicises the case and attempts to distract from possible shortcomings by police. US Ambassador Mark Lippert was slashed in the face, a wound requiring 80 stitches, while he attended a forum on Korean reunification at a government theatre across the street from the heavily guarded US embassy. The attack shocked Koreans but quickly turned into a highly charged debate that highlights an ideological divide between conservatives and liberals in South Korea over the reclusive and impoverished North. President Park Geun-hye and the conservative party's leader labelled the case an attack against South Korea's alliance with the United States. Lippert's face was slashed days after annual U.S-South Korean military drills began, exercises the North routinely calls preparation for war. Under the National Security Law, first enacted in 1948 and last revised in 2012, possessing literature supporting entities that threaten state security is subject to prosecution and two or more years in jail. North Korea is considered such an entity. "The clause on praising and encouraging anti-state entities is the most problematic, and the most politically abused one," said political analyst Yu Chang-seon, referring to the part of the statute that the police want to apply to Kim. SECURITY CRACKDOWN Kim has yet to be charged formally under the security law but police have been focusing on his possible links to North Korea. [ID:nL4N0W8062] "The Lippert attack has turned into a security crackdown," said Lee Kwang-cheol, a defence attorney and a member of the liberal group Lawyers for a Democratic Society. "This is being handled as a political case and (politicians) are giving some kind of guideline to the police," Lee said. The attack on Lippert is the latest in a string of recent applications of the National Security law. In December, the Supreme Court upheld a sedition conviction against a former parliamentarian and member of a party already outlawed for pro-North activities. Authorities deported in January a South Korean-born American who had spoken positively of life in North Korea, and jailed another woman who joined her in giving speeches. President Park said at the time the security law was needed because North and South Korearemained at war. In 2004, the then-ruling liberal party and the conservative opposition, led by Park, agreed to remove the problematic clause about praising and encouraging non-state entities to make the security law less politically subjective. The revision, however, failed when hardline liberals insisted the law be abolished altogether. "Today the atmosphere is completely different, so that nobody can even mention the idea of revising this law, let alone abolishing it," said analyst Yu. On Monday, a large crowd of older men in military uniforms held a rally two blocks from where Lippert was attacked, calling for authorities to weed out pro-North factions, derisively called "jong-buk". "The National Security Law is the right law to ensure the continued existence of this country," said Park Tae-young, 67. "I think it should be strengthened." – Reuters